In this section, Prof. Perron discusses how the instructors convey the social relevance of geology in 12.001.

When you’re teaching about processes that unfold over billions of years, it can be easy to gloss over geology’s social relevance, because, as an instructor, you’re struggling to cover so much content. Nonetheless, we think it’s very important to do so. One way we do this is by highlighting how humans impact and are impacted by the natural processes that we discuss in the course. We try to do this whenever we have a topic that’s relevant in some way. For example, when discussing landslides, we note how land use influences soil cohesion. Even contemporary anthropogenic climate change becomes relevant in this conversation because we discuss the effects of changes in the precipitation regime on landslide patterns. 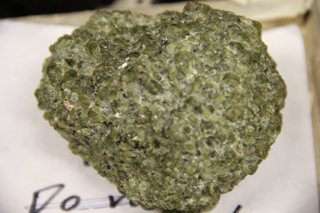 A rock from the rock identification lab. (Image by MIT OpenCourseWare.)

The socially relevant topics we discuss aren’t always related to surface processes. When Prof. Oliver Jagoutz talks about metamorphic reactions in rocks, he discusses a process called serpentinization, which, as it turns out, consumes CO2. There have been proposals to sequester CO2 by encouraging serpentinization reactions in rocks, which would then lock the CO2 in the minerals and take it out of the atmosphere. When he discusses metamorphic rocks, he spotlights this socially relevant application.

One topic that always surfaces in politicized discussion of climate change is the geologic record of climate variability and the role of humans in this change. I address this directly in my lectures. I take the debates about climate change that students see in the media and put them in context. I also facilitate a class activity that directly engages students in the debate. I divide the students into teams of climate scientists and “deniers.” I coach both teams as they develop arguments. We have a series of debates and then we talk though the underlying issues.