In this section, Professor Haynes Miller shares elements of Daniel Kan’s life and his approach to teaching.

Daniel Kan grew up in Amsterdam. When World War II unfolded, he and his entire family were interned and spent most of the war in Bergen-Belsen concentration camp. Although he and his parents survived internment, Kan was orphaned when his parents died of dysentery during the liberation. 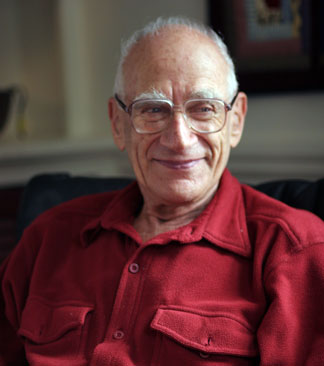 After the war, Kan returned to Amsterdam and completed college there. He then immigrated to Israel, where he continued his studies at the Technion—Israel Institute of Technology. He made his living by working with an oil exploration company. The company never found any oil, but the experience gave Kan a lot of spare time to think about math. He was very independent and isolated; he thought about algebraic topology in his own way. Few people around him knew anything about what he was doing.

Eilenberg was impressed. He arranged for Kan’s work to be accepted as a PhD thesis by the Hebrew University, and invited him to visit Columbia University as a postdoctoral scholar. Dan spent a year there. He also spent a year at Princeton, and then, in the late 1950s, came to MIT, where he became a faculty member.

Kan had his own, extremely independent attitude toward mathematics—and also toward teaching. He rarely lectured. He simply refused! I heard him lecture once at a conference. But he really didn’t like that. That wasn’t his style. He would much rather talk to people and have a conversation about mathematics. You can really see the origins of the Kan Seminar in his personality.

Kan felt strongly that his role in graduate education was to help students think about what part of the subject resonated with them most deeply. He wanted to help them identify their motivation for engaging in this field of study—to discover their own scholarly passions. The reading responses students wrote in the seminar were a way to elicit reflection and self-evaluation. He was also ruthless about telling people when they he thought they didn’t have the motivation to continue; when students didn’t have a strong resonance with topology, he would encourage them to try something else. He was willing to help students find what was important to them, even if it didn’t align with his own area of expertise. As a result, there are many people who have nothing to do with topology who have been deeply influenced by his sincerity, his directness, and his openness.