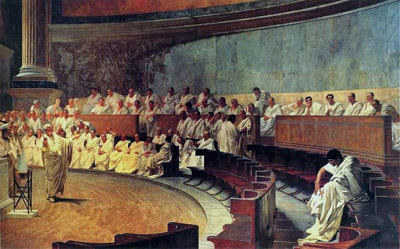 Short Paper 4 should be a response paper on Cicero’s In Catilinam (‘Against Catiline’) I–II.

The episode of Catiline’s conspiracy in 63 BC is of great interest in its own right. It is also often used by modern scholars as a window into broader issues that characterized the decade of the 60s BC at Rome. In describing the plot and making his case against the conspirators, Cicero’s speeches capture many of the underlying factors that contributed to the outbreak of violence between Catiline and his supporters on the one hand and the Roman state, led by Cicero as consul of 63, on the other. In your response, you should identify one such factor and offer a critical appreciation of how that factor operates in Cicero’s first and second speeches against Catiline.

The paper is due during Session 13.