In this section, Professor Short gives examples of ways he incorporates experiential learning into his teaching approach.

OCW: What opportunities do students in the class have to engage at an experiential level?

PROFESSOR SHORT: When we learn about reactor power manipulation, we let the students manipulate the power of our research reactor. We have a six-megawatt reactor, and we let the students take the control rod controls. They’re able to push the rods in to lower the power, and raise them up to raise the power, and they’ll notice that, as they’re inserting the rod, the power goes down. And then they stop moving the rod and the power keeps going down. So then they have to lift it up again, and it shows these strange and nonlinear methods of reactor control. But the student’s also usually sweating and shaking because they’re controlling a six-megawatt reactor. 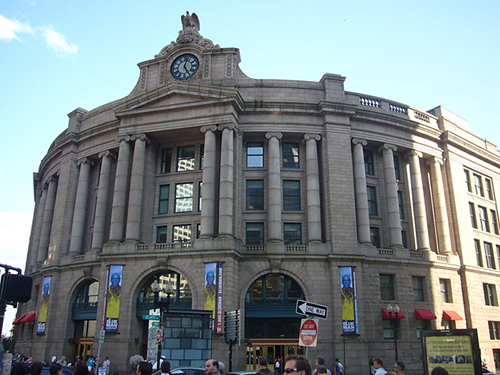 Granite structures, such as the façade of Boston’s South Station, can give off significant levels of radon gas. (Image courtesy of Bogdan Tapu on Flickr. License CC BY-NC.)

Luckily, there are electronic systems to prevent anything from going wrong. If anything goes in too fast or slow the computer takes over. But even though we tell the students that, they know they’ve got six megawatts of power in a little dial in their hands. And then we ask them to analyze their data: Why did the reactor behave this way? Why is it that when you stopped lowering the rods, the power kept going down?

So we have the student take the controls of the electron microscope and analyze it. Does that diamond emit zirconium x-rays? If it does, it’s cubic zirconia. If it emits silicon x-rays, it’s moissanite or silicon carbide. One year this class happened to fall on parents’ weekend. So I asked the students, “Does anybody have a diamond ring?” And one of the students’ mothers said, “Oh, yeah, let’s check my engagement ring.” And her husband was just thinking, “Oh, God. What’s going to happen? What’s going to happen?” It turned out to be real. We had the proof!

I also challenge the students to find the most radioactive place in Boston. They have to go in teams of two and pick a place that they thought would be radioactive based on what we’d learned about where you find radiation. A lot of radiation comes from space, from cosmic protons that hit the atmosphere. So some students figure that by going to the top of the tallest building they’ll probably get more radiation.

Others have read about radon underground because there are isotopes of radium emitting radon gas. And so they go down into the subway, to get as low as they could go. Still others look at the relative amount of radiation in different building materials like wood, clay, marble, and granite, and they go to the most granite-dense locations they can find, or the ones with the most marble.

And those are the students that win. There are places in Boston that have six times the normal radiation background simply because they’re made out of marble or granite. These include structures like the state house and some fancy fountains around town. These students don’t know about the fountains. They just think, “Let’s find giant chunks of stone.” And they’re right.

OCW: What are the behind-the-scenes logistics of organizing learning experiences like this?

PROFESSOR SHORT: To arrange good learning experiences you have to depend on a lot of people. When other people are involved, you can’t just prepare the lecture the night before. I typically have the schedule ready three months before the course starts, coordinating with the reactor shutdown schedule and locking in dates and times to make sure that the reactor will be running, that the equipment is working, and that the people I want there aren’t going to be on vacation or on travel.

It also requires a lot of thinking. I have an empty column in my syllabus for the week’s hands-on instruction. And I try to make sure that’s full. So when the students are learning to read a gamma ray spectrum, for example, to be able to tell how many high-energy photons are emitted from a source as a function of time, you need to create a source. And let’s say you want to make it personal, so you have the students pick a food that they like. Then you need to figure out ahead of time how many pounds of that food will be required to get a signal. Then you have to arrange for the timing of the order so it won’t rot by the time it’s supposed to happen. And you have to make sure that the students are ready, make sure that no one’s allergic to that food when you ask them to handle it.

OCW: Did you learn this way when you were a student? Or are you teaching in a way that’s different from how you learned?

PROFESSOR SHORT: I did not learn this way. Project-based and experiential learning wasn’t so much the focus of MIT even back in 2001 to 2005. Despite the motto being mens et manus, “mind and hand,” hands-on engineering wasn’t emphasized in the non-mechanical engineering majors. I think learning should be focused about equally on the fundamentals and their application, because otherwise what are you doing? How are you helping someone? It’s just a kind of self-gratification.

OCW: What is it like to teach in a way that’s different from how you learned? Is it exciting? Is it scary? Is it challenging?

PROFESSOR SHORT: It’s natural. When I think back on all of my experiences, I realize that the courses from which I remember the most were things like hands-on blacksmithing or laboratory courses. We had a lab class where we counted a lot of radiation, for instance, and I remember those labs very well. And I think back to my neutronics problem sets. I remember the theory pretty well, but I don’t have a distinct visual memory of that class. It just kind of happened. The knowledge may be in there somewhere. I don’t know. But I know where I was when I did most of the hands-on exercises. And in the end, you can make anything hands-on. Even neutronics.