In this section, Professor Short explains the overall topic of 22.01 Introduction to Nuclear Engineering and Ionizing Radiation and what he hopes students will take away from the class.

OCW: You took 22.01 Introduction to Nuclear Engineering and Ionizing Radiation as a sophomore at MIT, and now you’re teaching it and sharing it on OCW. What is this course all about?

PROFESSOR SHORT: The course is all about radiation, both its origins and its uses. It’s an introduction to everything nuclear that any student at MIT would take. For many students, it’s their first modern physics course, because the physics courses that first-year students take are often about  things we’ve known for 100 to 300 years, and the field of nuclear physics is still evolving. We’re still using nuclear radiation spectra to detect the presence of water on Mars or the moon. We’re still confirming our knowledge of which particles do and don’t exist, and why. So this is also an intro to modern physics.

OCW: Nuclear science, and radiation in particular, are emotionally charged topics. How are you preparing students to debunk pseudoscience and to really serve the public? 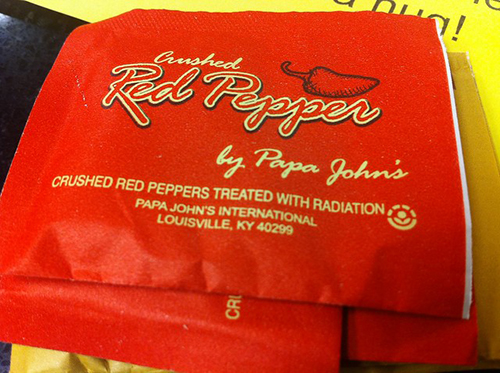 A packet of crushed red pepper that has been irradiated to prevent spoilage. (Image courtesy of Lee Bennett on Flickr. License: CC BY-NC-SA.)

PROFESSOR SHORT: We actually spend two weeks at the end of the class looking at studies that are false or have exaggerated claims, and teaching students what to look for. For the first 11 weeks of the class we teach the students the fundamentals of nuclear science, and then we turn to published articles, and blogs, and other things in the field. And we debunk myths like the myth that cellphones cause cancer due to ionizing radiation. Cellphones don’t emit ionizing radiation.

We debunk the myth that the tiniest little bit of irradiation can harm you. In truth we don’t know that to be true or false. And it’s a good thing we don’t, because we would need to have exposed tens of millions of people to low levels of radiation in a controlled study, which is not something that’s ethically correct to do. It’s also not ethically correct to say that all radiation causes harm, because we don’t know. And I want students both to recognize false science in the field, and to recognize when we don’t have enough information to say something confidently, and be comfortable with that lack of knowledge. The lack of knowledge means there’s something new to explore. But if you don’t have something to conclude, don’t draw a conclusion!

On the last day of class we often have an irradiated fruit party where I bring in fruit that could only be brought into the US because it’s irradiated. There are many different types of produce, including fruits, that are irradiated. And it’s the only known way to kill all of the insect, viral, and bacterial pathogens that can wreak havoc either on people or on our crops. Irradiation kills the pests, and it doesn’t harm the food or make the food radioactive.

When students eat foods that they may or may not have known have been irradiated, they taste good, they seem safe, and it’s one of those things where, once it’s personalized, it’s not as scary. When you learn the knowledge and then you see it for yourself, it becomes a lot more acceptable.