search give now about ocw help & faqs contact us
ES.240 | Spring 2006 | Undergraduate
Composing Your Life: Exploration of Self through Visual Arts and Writing

How students are doing with their on-going photo and writing, collecting found materials, etc. (this is materials used for final projects on “self-portrayal”) - 5 minutes

Visualizing Self in Historical Context - 1 hour

To see how current or historical world events have an influence on you; to create an image of yourself in context of a current event.

A self-portrait always carries with it a subtext of self commentary. We are often self-conscious when someone else brandishes a camera and focuses their lens on us. When we turn the camera on ourselves, we are now in charge of when, where and how the photo is taken. By virtue of this process of considering the where, when and how of this process, there is a natural self-examination taking place. In context of a noteworthy current or historical event, you are adding another layer to this process of self exploration: Why me here? Why me now? How do I relate to this event? How do I imagine I will feel about this event tomorrow? Next week? Ten years from now? How will others view my relationship to this event? As you begin this exercise, take some time to consider these questions. Make a note in your journal about your musings-you will be asked to revisit this later on. 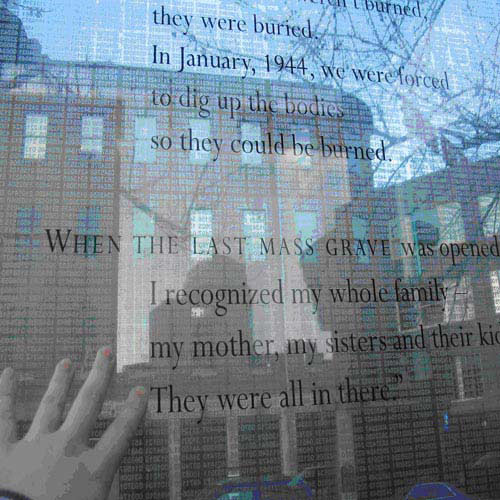 The first time I can remember being introduced to the Holocaust was in fifth or sixth grade in English. We read a book that was about a boy in the holocaust. It really went deep for me and has always stuck with me.

The historical event that has always been closest to me is the Japanese internment because I had relatives involved in it. Through it many things have been imprinted on me. I have learned that humans have done some truly atrocious things in history, equality and tolerance are values that are not always respected as they should be respected, and the dark sections of history are often forgotten. I can remember one time hearing that there are people who don’t believe that the holocaust happened, despite all of the first hand accounts and evidence everywhere. If people can deny something this immense, how easy is it to forget the smaller things? If they forget, they can let it happen again, and that scares me. I guess because I had relatives that were discriminated against, equal rights have always struck close to home. I can’t even begin to explain how important it is to me that the holocaust is remembered.

One of my closest friends is Jewish. Her family survived the holocaust, barely. She has a truly amazing account of survival to tell about her family. How many other similar stories are out there? Each one unique and yet each one with the same horrific theme. You could almost say that I am almost fascinated by the blackest parts of history, the biggest injustices, and the most pain. In a sense I am, but I think it relates more to me wanting to make the world a better place. I’ve always felt that through memory alone a lot can be prevented. Also, though every one of these stories is sad and depressing, in each is a resounding theme of human spirit and endurance which is uplifting. They make the hard times more bearable. They attest to the human struggle and the vast amount that humans can suffer, and they make my trials seem miniscule.

This particular memorial is located on the freedom trail in Boston near Haymarket. The first time I saw it was near the beginning of last semester. I remember thinking at the time that it was kind of odd. I didn’t realize what it was until later. Today was the first time that I’ve ever really looked at it. I was expecting to go and just take the picture and leave, but I ended up spending quite a bit of time just reading the quotes and soaking up the memorial. I found it really powerful. I chose the quote in the picture because that one affected me the most. The amount of cruelty, pain and tears portrayed in the simple sculpture is incredible. I must admit, I was in awe. All of the people in the area just walking around, going about their lives really struck me too. I wondered how many of them had ever really looked at the memorial and how many of them pass it every day, but have no idea what any of it reads. Although I was amongst many people, for a moment, I felt isolated; I only shared the pain I felt with those long ago affected by the holocaust.

I chose to take the picture showing only my hand for the obvious logistic reasons, but also because it only seemed right. I felt that the focus should lie with the memorial itself and the use of a hand touching it represents the connection I felt to it when I visited the memorial.

Following the exercise, run a discussion based on the following questions:

Student Commentary on Exercise One

“I really liked the historical photo exercise. I haven’t really had the chance to look at that (holocaust) memorial previously and I liked the opportunity. I felt that it helped me think a little bit more about how my family’s history has affected me.”

“It was refreshing to see the diversity, from academic, social and personal history, of the points of view in this exercise.”

To give students a sense of what it is like to be part of a newsworthy or historic event; to offer a perspective of being in some one else’s shoes; to better understand being part of a publicized event changes peoples perceptions of you; to better relate to people who have had an impact on world history.

Switching place with someone else is a commonly practiced technique for helping people to gain perspective. Most often this is done by trading roles with someone else also participating in the exercise. Switching roles with someone who has already made their mark in history offers a unique perspective on not only what it might be like to be that person, but also to better understand what makes an event historic, as well as relating past important world events to your own life, to make them more real. Insinuating yourself into a past historical event brings that event to the present, makes it current, and can increase your awareness of the importance of understanding something about what has come before.

Clip a news article about a current event. You can choose any event you like, but draw it from a major recognized new source such as in the New York Times or CNN. For sake of this assignment, it is easiest if you can copy an electronic version of the article and place it in a word processing program that has a global search and replace feature. Then replace one of the key players in the article with yourself. If the gender is different from you own, be sure to replace all relevant pronouns. Make enough copies of the new article to distribute to members of the class. Read each article aloud to the group and discuss how it feels both be a character in the article. Also discuss why you choose to play that particular role, why you choose that particular article, and the impact that the events depicted in the article have on you.

In following the fossil tracks of human evolution, scientists have or years searched for links between Australopithecus, the kin of the famous “Lucy” skeleton, and even earlier possible ancestors. Now, they think they have found some connections in Ethiopia …{Student’s name}, a paleontologist at the University of California, Berkeley, who was a team leader, and her colleagues said the 4.1-million-year-old fossils were anatomically intermediate between the earlier species Ardipithecus ramidus and the later species Australopithecus afarensis, the Lucy family. The newfound bones and teeth are the earliest remains of the most primitive Australopithecus, known as anamensis. “This new discovery closes the gap between the fully blown australopithecines and earlier forms we call Ardipithecus,” {Student’s name} said in a statement. “We now know where Australopithecus came from before four million years ago…finding these three things in time sequence in a single place, that’s never happened before,” she said.

“Scientist-CEO to be Third Space Tourist”

An American researcher and entrepreneur is set to be the next paying visitor to the International Space Station (ISS), where she hopes to conduct research as well as enjoy the view. {Student’s name}, a 58-year-old scientist who heads the Princeton, New Jersey-based company Sensors Unlimited, Inc., plans to ride a Russian Soyuz to the ISS in April 2005 if not sooner." If I get the chance to go early, I am all ready for it", she told SPACE.com. “I’m looking forward to getting started.” {Student’s name} is paying $20 million for the space trip…Originally from New York City’s Brooklyn, she is currently a resident of Princeton, New Jersey…In addition to conducting space science and the opportunity to reach space personally, she said she hopes her voyage will encourage some of today’s youth to pursue careers in science and engineering, a scholarly path that led her to her date with the ISS…{Student’s name} first began planning a space trip in June 2003, months after the Feb. 1 Columbia accident that gave the public an unmistakable example of the risks inherent to spaceflight. “Life itself is a risk, in any type of exploration, and I just don’t think about it” she said. “I’m just really eager to go.”

Following the exercise, run a discussion based on the following questions:

“I chose to replace a woman who had killed her sons and then pled insanity, stating she thought it was a call from God. Putting me in this role was a drastic change. I was in a role I could never imagine playing. It was uncomfortable to read of myself as a God-obeying murderess. The psychology of this woman was so foreign to me. I’m tempted to read more about this case to learn more about this woman and her thoughts.”

“I was fascinated by how easily I “bought into” the replacement in the newspaper article assignment.”

“I learned that news can be very biased.”