Welcome to the new OCW website! You can help us make it even better. Learn more. 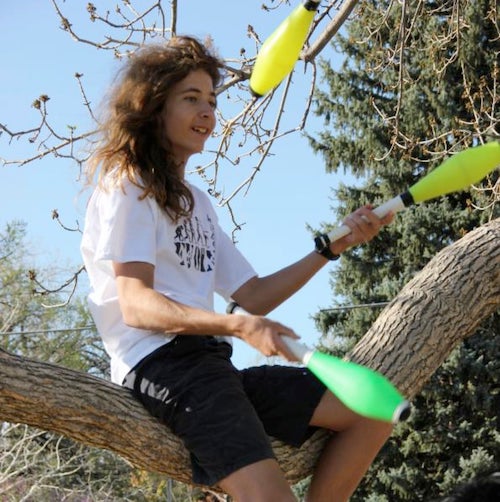 "OCW refreshed all my interest in math and got me totally inspired by the material again. It changed my whole perspective."

On most counts, Jamie Tucker–Foltz is your average teenager. Hailing from Colorado, he’s into juggling (keeps five clubs in the air, and shooting for six), plays volleyball, likes to draw and paint, and enjoys building computer games using the MIT Media Lab-created Scratch programming tool. Academically, however, he’s facing a challenge that far fewer teenagers can claim to have achieved: “I’m a sophomore at Boulder High School, and basically, I’ve run out of classes.”

A highly gifted student, Jamie has been taking his high school’s advanced math and science courses since seventh grade, so it’s no surprise that he’s exhausted major portions of their STEM curriculum. While his parents and the school system had always been strong advocates for Jamie’s needs, they were nearly out of options. They had hoped that some nearby colleges might offer a solution, but couldn’t get Jamie a spot in the over-enrolled freshman classes that he required. He tried auditing some of the less popular college math courses, but found them discouraging–often taught by novice graduate students to a sparse audience.

That’s when his parents turned to MIT OpenCourseWare. Jamie was already familiar with OCW from seventh grade, when he followed physics lectures to help him better understand some key concepts in his high school physics class. This time, however, was different: They wanted to use OCW’s 18.02SC Multivariate Calculus as a full-credit course. Working with his high school’s administration, Jamie and his parents devised an independent study program in which Jamie would watch all the lectures, complete the assigned problem sets, and take the exams in a controlled setting. Jamie’s mother also found a doctoral student in Applied Mathematics as a weekly tutor to help Jamie whenever he got stuck.

“Watching OCW lectures, you feel like you’re really there, and all the jokes and energy of the professor comes through. It makes it much more fun and easier to learn.”

For the experiment, Jamie’s standard routine was to watch an OCW lecture during a free period at school, then do the problem sets at home. Whenever he encountered a particularly tricky concept, he saved his questions for the weekly tutoring visit. He notes, however, that the OCW problem set material was particularly useful for letting him work through his own difficulties. “The OCW solutions are really good at walking you through the reasoning behind the answers. They don’t just give you the solution without any explanation. They really teach you how to think.”

By all accounts, the experiment worked wonderfully: “The combination of the inspirational OCW video lectures, interesting and challenging problem sets and exams, along with a very knowledgeable tutor, was a winning combination,” said his father. Jamie earned an A on the course, and is eager to move on to another, this time 18.03SC Differential Equations.

Asked to explain why the course worked so well for him, Jamie notes the inspiration factor: “OCW refreshed all my interest in math and got me totally inspired by the material again. In that way, it changed my whole perspective. The professors are so great at explaining things clearly—I think that’s what really sets it apart.”

Equally important to Jamie was the way that OCW gave him a glimpse into what it might be like to attend a top-notch university. “It lets me feel like I’m really a student and part of the class,” he continued, “Watching OCW lectures, you feel like you’re really there, and all the jokes and energy of the professor comes through. It makes it much more fun and easier to learn.”

Jamie’s high school challenges are not over. He and his parents continue to explore options, including the possibility, if he can complete his requirements, of attending college early. He wants to apply to MIT, but when pressed further about his future plans, this gifted young man plays his advantage and reminds us that he’s still a teenager. “Well, in school I like all the math-y sciences. I like understanding how things work, and using math to solve real problems.” He pauses to search a little further, and then finally admits with a smile, “You know, I guess I’m not really sure. I’m still just in high school. I really have no idea at this point.”