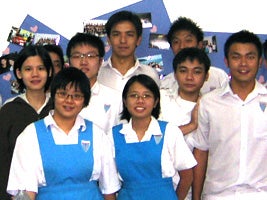 "OCW provides a chance for the students to get an idea of how it would be when studying abroad."

A secondary school mathematics teacher in Kuala Lumpur, Malaysia, Kian Wah Liew introduces his 18-year-old students to a range of complex concepts, such as matrices, determinants, and differential equations. Though his lessons are conducted in Mandarin, the students use an English textbook – which tends to make Liew’s life more complicated, since his students possess a wide range of abilities in both English and mathematics.

Liew, who discovered MIT OpenCourseWare several years ago while searching the Internet for self-study resources in math and physics, sometimes uses OCW video lectures to supplement his teaching. Because the topics are difficult, and the students’ grasp of spoken English imperfect, Liew finds that he often has to narrate the videos as they play.

“Since a few lectures in the introductory level courses on OCW are similar to our syllabi, and because I like the way the lecturers conduct their lessons,” Liew says, “I sometimes use the lectures in the classroom. I let the students watch a lecture – for example, an 18.03 Differential Equations video – accompanied by my own explanations.”

Studying abroad without leaving the classroom

Liew admits that the OCW video lectures are sometimes too difficult for his students to fully grasp. But at the very least, he believes, the lectures introduce students to another approach to education.

“OCW provides a chance for the students, who never learned in an English-speaking environment to get an idea of how it would be when studying abroad,” he says. In addition, Liew sometimes steers his most gifted students to other courses on the site to supplement their education.

The students are not the only beneficiaries. Liew, whose own education took place in Malaysia and Taiwan (a bachelor’s of science in mathematics in Taiwan, and a master’s of science in statistics in Malaysia), also appreciates OCW because it allows him to experience a Western approach to teaching.

“The Western style spends more time on ‘ideas’ than ’examples.’ Here, we spend 20 percent of the time introducing ideas and 80 percent in demonstrating these ideas through examples. At MIT, most of the time is spent on clarifying the ideas, and very few examples are given during the lectures.”

Liew has only limited freedom to change his teaching approach, due to the tight syllabus-related constraints that he must work within. Even so, he says, OCW has been a very important resource to him: “The impact on my mind,” he concludes, “has been great.”