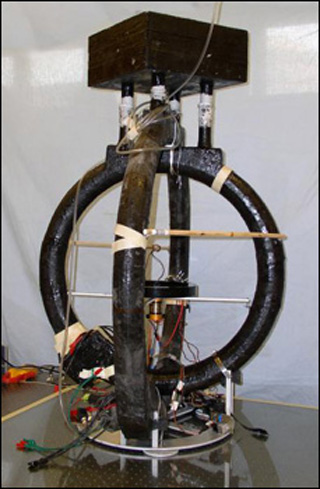 Space Systems Engineering (16.83X) is the astronautical capstone course option in the Department of Aeronautics and Astronautics.  Between Spring 2002 and Spring 2003, the course was offered in a 3-semester format, using a Conceive, Design, Implement and Operate (C-D-I-O) teaching model. 16.83X is shorthand for the three course numbers: 16.83, 16.831, and 16.832. The first semester (16.83) is the Conceive-Design phase of the project, which results in a detailed system design, but precedes assembly.  The second semester (16.831) is the Implement phase, and involves building the students’ system.  The final semester (16.832) is the Operate phase, in which the system is tested and readied to perform in its intended environment.

This year’s project objective was to demonstrate the feasibility of an electromagnetically controlled array of formation flying satellites.  The project, “EMFFORCE”, was an extension of the first C-D-I-O course project, “SPHERES”, which ran from Spring 1999 through Spring 2000, and demonstrated satellite formation flying using gas thrusters for station-keeping.  The whole class works on the same project, but divides into smaller subsystem teams, such as power, metrology, and structures, to handle design details.