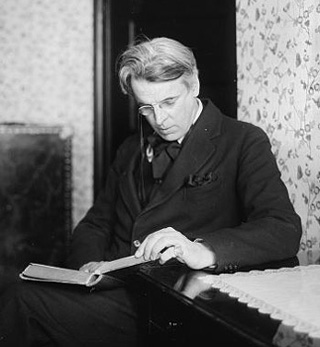 This course considers some of the substantial early twentieth-century poetic voices in America. Authors vary, but may include Moore, Frost, Eliot, Stevens, and Pound.

We’ll read the major poems by the most important poets in English in the 20th century, emphazinig especially the period between post-WWI disillusionment and early WW II internationalism (ca. 1918-1940). Our special focus this term will be how the concept of “the Image” evolved during this period. The War had undercut beliefs in master-narratives of nationalism and empire, and the language-systems that supported them (religious transcendence, rationalism and formalism). Retrieving energies from the Symbolist movements of the preceding century, early 20th century poets began to rethink how images carry information, and in what ways the visual, visionary, and verbal image can take the place of transcendent beliefs. New theories of linguistics and anthropology helped to advance this interest in the artistic/religious image. So did Freud. So did Charlie Chaplin films.

We’ll read poems that pay attention both to this disillusionment and to the compensatory joyous attention to the image: to ideas of the poet-as-language-priest, aesthetic-experience-as-displaced-religious impulse, to poetry as faith, ritual, and form.