Organization of the Course: Lectures and Labs

Students are organized into groups of 2 or 3. Laboratory sessions are usually 2-3 hours, and occur on Tuesday and Thursday. Sets of readings for each lab are to be read before class. Some readings are in the text, and others will be handed out.

Lecture will cover background material pertinent to lab, in these areas:

Brief report on each lab: Summarize and interpret your results; details on the method are not necessary. The written report is to be handed in on next class day after the lab.

Short term paper: Select the topic about middle of semester; propose a limited experiment. An oral report on the results will be presented during last few class meetings. Submit the written version (in format of Journal of the Acoustical Society) at the end of term.

No exam: Grading is based roughly 40% on the term paper with the rest on lab reports and participation in class.

Wherever possible, the book citations below reflect the specific editions used in the course.

Study of speech often summarized as the study of a chain of events, beginning with what goes on in a speaker’s brain to plan an utterance, moving through the acoustics of speech and ending with the steps in the listener’s brain that result in comprehension of the utterance: 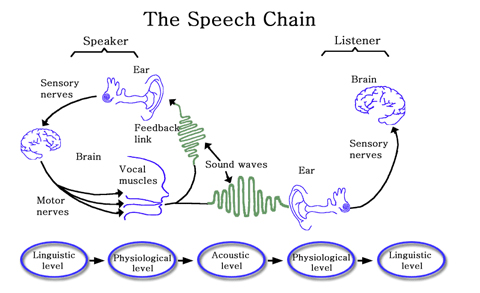 This approach makes clear the diversity of topics one must understand in some depth in order to do basic research in speech.

Diversity of Topics that Relate to Speech Research

The course spans the topics of acoustic analysis, mechanics of human speech production, and human speech processing with an emphasis on relating each area back to linguistic contrasts.

Studies of people’s response to simple and complex sounds.

In this course, we stress the use of computer algorithms, and their individual strengths and weaknesses, rather than the mathematics of the algorithms themselves (references available).