In this section, Prof. Demaine explains the changes to 6.849 when he taught the course in the inverted lecture format in Fall 2012.

Deciding to “Flip the Classroom”

There were two factors that led me to exploring the inverted lecture format. The first was that flipped classrooms are an increasingly popular concept, and many people—including myself—are curious about their potential. The second was that I had wanted to video-record my courses as a resource for the world to have, and the videos communicated much more than the lecture notes alone. These points were especially true with 6.849, which is a course that probably is not taught anywhere else. There are not many experts in the field so it is a hard class to teach comprehensively, and so it is a particularly nice class to have online. In Fall 2010, we video-recorded 6.849, and it was the first course that I video-recorded. The subsequent offering in Fall 2012 was the first time I was able to teach a course that had its lectures recorded ahead of time. There was this natural pipeline for testing out the inverted lectures, and since the video lectures were already prepared, we were able to do something different with the class sessions and essentially “flip the classroom.” 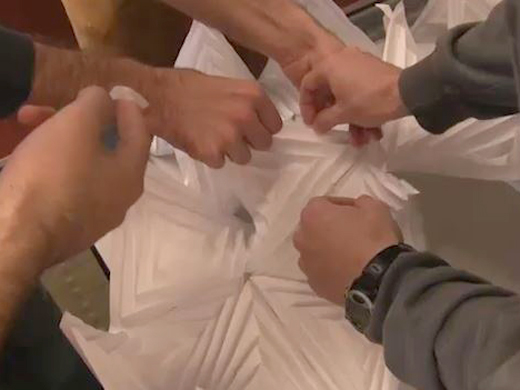 Students participating in a group folding activity during class.

6.849 was my first experiment with a flipped classroom, and it was one of the first advanced courses at MIT to be flipped. I felt that while not a huge amount of the material had changed since the videos were recorded in 2010, there were definitely advancements in the field that had taken place. I wanted to try having students watch the video lectures before they came to class. There were two classes a week, and prior to each hour-long class session, students were asked to watch the 1.5-hour video lecture and submit an online completion form 24 hours before the start of the scheduled class session.

Through the form, they were asked to submit questions about the lecture material and suggest anything that I did not cover in enough detail or even at all. Basically, those responses from the students filled the corresponding hour of class. I then had to scramble for the 24-hour period immediately before class to put together what turned out to be another kind of “lecture” during which I addressed various students’ questions and constructed what was usually a fairly elaborate answer involving images to show different aspects of folding that I would not have had time to cover in the usual lecture format.

This was great for the students because they had a real hand in shaping what I covered in the class sessions. I also talked about updates and research advancements that students would not necessarily have known to ask about. This doubled the amount of videos that are now available, but it forms a nice sequence where you have the core video lecture and then the additional in-class video. We also did some, and maybe not enough, in-class building exercises, and the class videos show the end product of these sculptures. That gave students some hands-on experience, and building things in a group was a fun way to achieve that goal. I definitely enjoyed that and might try to do more of it next time.

One thing that surprised me, though I see this time and time again, is that students are extremely honest. The first question on the form is, “Did you watch this video lecture?” There was a deadline for the form, and the number of students who submitted this form late because they watched the video late and did not want to answer “yes” until they had actually watched the video was pretty astonishing. The majority of the students did submit on time, and usually a small fraction of students offered comments. For any given class session, maybe 20-30% of students mentioned something they wanted to see in the class session, but it was enough to get me going. I think most students mentioned something for a select number of the video lectures, just not all the time. They may not have had time to think of anything interesting to cover, or they may not have had anything interesting to say or ask about that lecture. It was always a little scary for me because I did not know whether I would have anything to cover in the next class. But there was always enough feedback! Almost every time, except maybe the last few of weeks of classes when everyone was very busy, I had a wealth of input. I actually had to think, “Okay, there are too many ideas. Which ones should I focus on? What should I cover?” I think the students probably got a kick out of seeing their questions up on the board and getting an answer.

Preparation for Lectures and Class Sessions

A comparable amount of time went into preparing a regular lecture and preparing a class session in the flipped format, although the things that I spent my time on were different. The lecture involved planning what I thought would be best in the given amount of time, what the key results were, and which ones would fit nicely into the lecture format. The next step involved reading the research papers that describe these results, unless they happened to be in our textbook, and figuring out how to present them. With the class sessions, the process was more dynamic since I had to adapt to whatever the students asked. A lot of their questions focused on how concepts were used in practice. I did a lot of research finding cool images and videos about how folding problems were used in practice. This equated to a lot more time, though less math-focused time, and more exploration of all the different facets of folding that I knew less about. Trying to assemble a nice slideshow about all these questions and offering more examples was harder, but I received support from my TAs and my father who works in this area as well. For a lot of these algorithms, there was typically only the one example that was done originally, and no one had tried to make more examples. So there was a lot of work drawing figures and figuring out new examples. In a way, this was a valuable project as an educator because I can definitely use these new examples going forward. It was also good in that it forced me to think outside my usual perspective on how to present the material.

One downside to the inverted approach is that the total amount of material I covered was a bit overwhelming. It sometimes felt like more and more lectures were getting piled on, which is good at some level of learning things. However, I want to explore more problem-solving types of activities in the class sessions, such as doing problem-set-style questions and attempting to solve mathematical things. In a group, these particular problems can be a lot easier because even if one student does not have a good mathematical background, he can see how that process works. These questions can be a really good introduction to the problem set, or maybe we could work on the actual problem set during class sessions in groups. Another possible approach is to take the open problem session that is currently optional and try to integrate that to some extent into the main in-class sessions. The advantage of going this route is that if there are no good questions, we would have the baseline of “let’s just solve some problems” in a way that is fun and interactive.

The next time I teach this course it is going to be difficult because I have all these videos. There are too many videos of content for one semester. I might make a recompressed form of “the new main essentials,” but hopefully I will keep the flipped style and be able to do the more interactive things such as problem-solving.