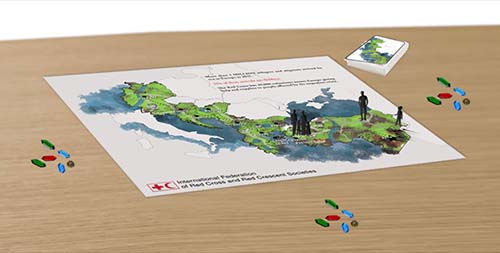 The Donate by Playing game.

Presentation slides about the game (PDF)

The data say that there are many people immigrating to Europe. In 2015 alone, more than 1 million people arrived to Europe by sea. The numbers are increasing every year. In the first 3 months of 2016 the number of sea arrivals was 6 times greater, than the same time in the previous year. This influx of refugees will put a lot of stress on relief organizations, as they will now be even more limited in the number of resources they have available.

The goal of our project is to increase funding for these organizations via a game. Our audience are donors attending a fundraising event for the International Federation of Red Cross and Red Crescent Societies. These people are at the benefit because they want to donate and have some level of investment in the cause. Our goal is to encourage the attendees to donate by eliciting an emotional response via game play. Our game puts them in the position of refugees and shows them how the money they donate to IRFC will directly impact the lives of people trying to immigrate to Germany.

We want to tell this story to highlight the impact that relief aid can have on the life of a refugee. The journey to asylum can be painful and exhausting. Often times it leads to separation from one’s family, and sometimes it can even lead to death. We want to show that this is not how it has to be. There are organizations out there that provide relief and make the lives of refugees more bearable, and donating to organizations such as IRFC can have a direct impact on the lives of real people.

One of the most powerful data sources we used for our project were personal stories found online, that were documented by real life refugees. This helped a lot in the creation of our characters and what sorts of events can occur during an immigration across Europe. These personal stories both contribute to the accuracy of the journey and also help the players sympathize with situation and feel an emotional connection to the player.

Another useful data source was the UNHCR database of the popularity of various routes across Europe. These helped with the design of the gameboard. There are many paths the players could traverse, however we only decided to include those that were actually feasible. To achieve this we removed routes that included borders that were closed. We also chose to only include paths that many people have travelled across according to the dataset, as opposed to less popular options.

The rules of the game are simple. You are a refugee from Syria trying to get to Germany. Along the way you encounter various obstacles but also different kinds of help. Each player will be assigned a character. The characters are: Malika – a 26-year-old nurse from Aleppo, Adnan – a 10-year old boy from Latakia, Youssef – a 30-year-old man from Homs and the Alsouki family – a family of 4 from Damascus

All players start with 10 stamina points. You draw a card at every location, starting from the common starting point that is Syria. The card has 2 kinds of information on it: it tells you where to go next, and it also tells you how each transition affects your stamina points. Some cards give the player the option to purchase stamina points. These real-life donations all go towards the IFRC fundraising effort to help the national Red Cross and Red Crescent societies in Europe to deal with the unprecedented number of refugees and migrants arriving from the Middle East and Africa.

We want the players to empathize with the obstacles and the hardship that migration involves.

We want people to encounter obstacles in the game that will motivate them to donate small amounts of money that can make a big difference.

We did not want to create a competitive game – buying stamina points benefits everyone on the table, so to speak.