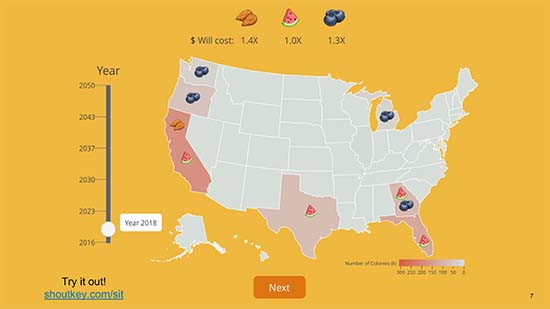 Save the Bees used an interactive map highlighting bee-dependent food crops and risks over time.

We created an interactive US state map of foods that depend on bees. As the user moves a slider, the year changes, and the map changes color to represent the amount of bee colonies left if bee Colony Collapse Disorder (CCD) continues at its current rate. Additionally, we display how food prices might change, given the amount of bee colonies remaining in a particular year.

We paired our interactive map with an informative display about CCD, as well as pre- and post-interaction surveys. We then went to the Copley Farmer’s Market in Boston and tested our interactive with 11 subjects who were shopping at the farmer’s market. Upon completion of the demo, each participant received a free packet of bee-friendly wildflower seeds, and was encouraged to donate or sign a petition to help save the bees.

We got our data from the USDA National Agricultural Statistics Service (NASS), which publicizes data about bee colony numbers in the United States. This data provided bee colony numbers by state over the last three years, as well as the estimated amount of money spent on bee pollination by state (the less wild bees, the more farmers must spend on pollination services). We found that bee colony were rapidly and alarmingly decreasing. In order to estimate the rate of decline of bee populations in each state, we calculated the average rate of decline in bee population for each state, and then used this average percent decrease to extrapolate over the entire period of our demonstration. It should be noted that this is a rough estimate, and obviously other factors will influence bee population, and decline is unlikely to be by the same percentage amount every year. Thus, we were careful to tell our participants that this data was calculated as if bee populations were to keep declining at the current rate.

While the colony decline calculation was relatively straightforward, we had more difficulty calculating the increase in food costs. After much research on projected costs, we found no academic work that contained the data we were seeking. Thus, we decided to extrapolate a prediction based on the dollar amount of bee pollination services used. We found that the amount of money farmers spent on bee pollination services was increasing every year, and we thus calculated the average rate of increase for each food crop, and used these rates to predict the price increases. This is a rough prediction at best, since other factors will play into food costs, and alternative pollination schemes are likely to emerge when food prices become high enough to make them economically viable. Thus, we were careful to explain to our participants that these were projected prices, and the real prices could vary widely in the future.

In order to build our demo, we calculated all of these rates of increase, placed this data into a spreadsheet, and then imported it into our Javascript application. Aside from our simple calculations described above, there was no data cleaning to be done, as the data provided by the USDA was already in a very useable format. By making simple calculations, we were able to turn this historical data into a story about the future. By allowing participants to choose which fruits they personally enjoyed, and only have those appear on the map, we turned a large amount of impersonal data into a story about the participant, allowing them to become more engaged and relate to our story on a personal level.

While we were brainstorming about ideas for this project, we knew we wanted to tell a story using the bee data, and we knew we wanted to create a map. We spent a long time considering different ways to tell this story, but ultimately decided that we wanted to target people shopping at farmer’s markets, since they were likely already predisposed to care about these issues. With this target audience in mind, we decided to focus on the cost of produce, as this would be a very tangible thing to people who are in the process of spending money on produce. With this audience in mind, we began to think about our goals. Our ultimate goal was to help end CCD, and we came up with three concrete ways to make a contribution. First, we would ask participants to sign a petition to ban neonicotinoid pesticides, second we would ask them to donate to Save the Bees, and finally we would give them bee-friendly wildflower seeds to plant. We also hoped to have them think about CCD over the long-term, and share this information with their friends.

In order to gauge the effectiveness of our visualization, we implemented a pre-demo and post-demo survey on the iPad, and also asked a series of verbal questions. The iPad survey asked the participants to rank three issues (CCD, climate change, and urbanization) in order of least threatening to most threatening to our food supply. The verbal questions at the end of the demonstration asked how likely the participants were to buy organic, plant the seeds, and tell their friends about CCD.

The iPad survey was not as successful as we would have liked, with the majority of participants not changing their answers and consistently ranking CCD second. Some participants ranked CCD as the most threatening issue on the pre-demo survey, most likely in an attempt to placate us (one person told us as much). Thus, when they did the same on the post-demo survey, it was difficult to gauge if their perception had changed. Overall, we found that most people had strong pre-existing beliefs about these issues, and our audience was in general well-educated and knowledgeable about these issues (3 of our 11 participants happened to be MIT graduates). We found that the mention of climate change in the survey tended to derail the conversation, as many participants had strong views about climate change. In the future, we would alter this portion of the survey.

The verbal interview questions were much more effective, and here we got our greatest source of feedback. The first person we spoke with was, by pure coincidence, an amateur beekeeper, and his feedback was especially valuable. He loved our idea, but said he wanted to see more information on CCD available to our audience, beyond the facts we presented. Indeed, this desire was expressed by others, so in future iterations we would bring along informative brochures we could hand out. Other participants noted that they already shopped organic, some exclusively. Almost all of them said they would plant the seeds, and most seemed excited about it. When asked if they would share information about CCD with friends, most took it as a suggestion and nonchalantly acquiesced, as if we were making a request rather than an inquiry. Overall, we received very positive feedback, and with a few tweaks, we believe this could be a viable project on a large scale that could make a significant difference in helping combat CCD.