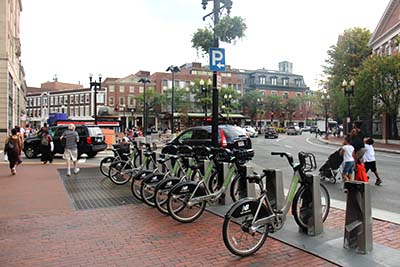 By Catherine Caruso, Kendra Pierre-Louis, and two other MIT students. (Used with permission.)

For this assignment we created a BuzzFeed quiz.

The data say that since Hubway’s inception in 2011, ridership has increased. In fact, earlier this month [April 2016], Hubway had its 4-millionth ride. However most of its riders were born between 1981-1986. People in their early to mid-thirties make up 38-percent of Hubway riders. Yet those born after 1991, currently only make up four percent of Hubway ridership. Getting young people to start riding Hubway is important for the system’s longevity because once people habits become entrenched it is difficult to get them to switch. This is why marketers target people during life transitions – marriage, pregnancy, etc – because it’s easier to get them to try something new while they’re already in transition. Similarly, we wanted to target young people as they made the transition from students to adults.

We wanted to tell this story because Hubway provides a vital service that complements mass transit systems, while reducing the carbon emissions associated with driving and improving the health and wellbeing of riders. In addition, Hubway doesn’t just benefit Hubway – it makes the streets safer for cycling generally and by proxy for pedestrians. Writes Emily Badger in a 2014 Washington Post article about the rollout of New York City’s bike sharing program, Citibike.

As more people bike and walk, cycling and pedestrian fatalities actually decline. That’s because the more people bike and walk, the more drivers become attuned to their presence (either on sidewalks or road shoulders), and the more cities are likely to invest in the kind of infrastructure explicitly meant to protect them (all of which further encourages more cyclists and pedestrians).

Our audience is 22-30 year old young professionals who live in the Boston area and need to commute to work. Our goal is to get more car and subway commuters using Hubway. Because it’s notoriously difficult to get riders to change habits, rather than an aggressive hard sell we thought we could get younger people to try Hubway through the game approach of a BuzzFeed quiz. We choose BuzzFeed specifically because according to its ad sheet:

Our goals are to increase ridership among our specified market by 10% over YTD performance. For this experiment which has some limitations – namely that we’re not actually Hubway, that we’re using BuzzFeed’s community sharing profile as opposed to its viral advertising and don’t actually have BuzzFeed support, we’d like to have 500 views/clicks over the week in which we launched the quiz with a 50% completion rate. To date we have a total of 108 views. 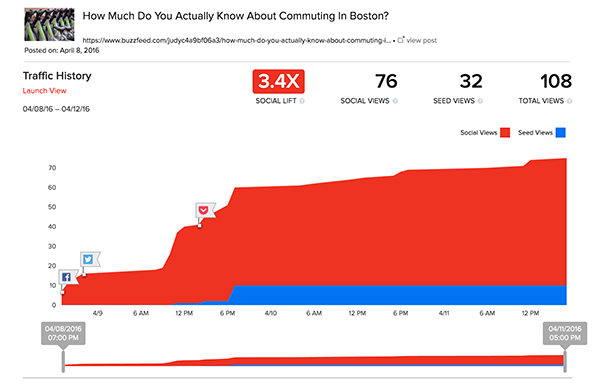 Traffic to the BuzzFeed quiz.

We’ve also received some support from Hubway itself. Last week Kendra tweeted out the link copying both BuzzFeed and Hubway on the link: 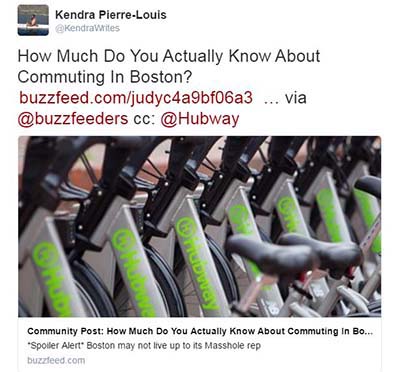 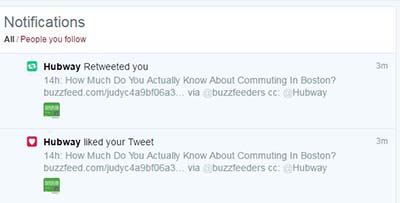 To produce this data we used Hubways 2014 bikeshare data. In addition, we used a wide variety of additional data sets for comparison points. For example, to compare the cost of commuting in Boston by Hubway, T, and car, we used the current cost of a full-priced monthly T pass provided by the MBTA. For car cost we used 2011 AAA data which put the cost for a medium sedan at 57.3 cents a mile, and calculated out the cost of that car commuting the average 7.6 miles per day for 50 weeks a year (assuming 2 weeks’ vacation). The carbon emissions data was based on. Calorie data was based on a bicycle calculator from bicycle.com and USDA calorie data.

We think this was an appropriate way of approaching the issue – the stereotype of the daily commute is one of a painful slog. We, instead, wanted to portray bicycle riding and Hubway use as the opposite of that – fun, whimsical, AND the smart choice. Testers within the target demographic responded that they laughed, and they learned something.

In addition, we felt like it was the right tone both for the audience we were seeking to target and for the data itself. Hubway data, unlike say the refugee data, isn’t particularly serious or fraught. And, on balance the story of Hubway so far is a positive story. People are embracing the system – we just want more people to embrace that system because doing so will make the system bigger and better as well as more enduring. Years ago, Kendra interviewed a woman working with the National Park system and she said that the fact that fewer young people are going to the parks and staying for less time when they visit is a problem. Without a connection to the park system they’re not going to vote for dollars to maintain it, or for politicians on the basis of how they feel about the national parks. The same is true for Hubway – we need young people adopting the system for its long term longevity. This isn’t to say that we don’t love and want to maintain our older riders – and the quiz does nothing to denigrate that audience.