This content is presented courtesy of the students and used with permission.

Our blog begins! Many things have happened over the past few weeks, including speaking to many experts at Children’s Hospital in Boston. (We will post noted from that shortly. In summary, there are three large areas of focus for improving the nebulizer: dosage, interface, and sterilization. We decided to focus on dosage.

Initially, we started off with the idea of capnography, in which we would measure CO2 exhaled to correlate to dosage intake. The design would have to incorporate the fact that CO2 does not directly link to the dosage. For example, maybe the nebulizer outlet is far from the mouth or the patient breaths out too fast. Also, a physician at the Children’s Hospital informed us that a baby’s exhale was not enough to be measured with capnography.

So, it was back to the drawing boards. Right now, we are focused upon an attachment to the current compressed air nebulizers that will allow 1) dosage to be monitored and 2) multiple patients to use it. So off the end of the nebulizer motor, image a the medicine being pumped into a reservoir that stores the vapors. Then several outlets would lead to the individual patient’s interface. The interface would only open or release vapors under the direction of the patient. Maybe this is by a mechanical sensor that needs to sit on the face or maybe this is a one way valve that is breath mediated so that only with the baby’s breath will the vapors be released from the reservoir. Moving on past this part of the interface is a sensor (likely an LED sensor) that can detect and sum up the amount (volume/time possibly) that passes by and will sum up the volume or time and signal when the full dosage has been given. Jose also had the idea to use some kind of sticker on the face that is color changing after receiving a particular dose.

Just to give some background to our problem and some of the important information we are working with!

The inspiration for this project came after having visited multiple hospitals, clinics, and health posts in Nicaragua. Currently, the nebulizer is commonly used in developing countries due to the high incidents of respiratory related diseases and infections (the mist from the nebulizer helps unclog liquids found in a sick patient rather than an inhaler). The current nebulizers that are used are air compressors powered by electricity, and the drug most commonly used is albuterol as it is the cheapest. These nebulizers are originally intended for home use but are used for over 30 patients/day in clinics and hospitals, Mothers stand in line with their child until it is their turn to use the nebulizer. These nebulizers do not provide a method for measuring adequate dosage and thus delivery efficacy of the drug to young patients are low, specifically infants. Infants are non-compliant to the face mask that helps administer the drug and the nozzle is just held underneath the infants’ nose without ensuring delivery and wasting a lot of medicine. Additionally, the devices do not have a system to visibly indicate that the device is sterile and ready for use for the next patient, and many are not properly sterilized.

We therefore proceeded to finding more information from experts at Children’s Hospital; including a pulmonologist, respiratory therapist, and a nurse. Below are some important and interesting findings we were able to gather from all three:

Ideas for monitoring airflow as a way to monitor dosage 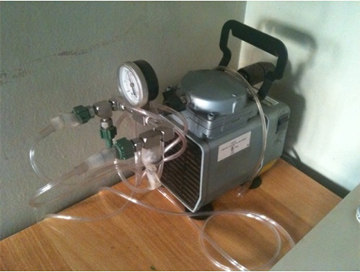 Some useful sites that were recommended to us by Jose to explore:

Another device Jose helped us come across which almost basically solves our issue… Aeroeclipse!

Background Discussion on the Capnography Technology
by Shan Tie

The use of capnography was first considered as a way to monitor dosage. Caroline had initially discovered this technology in the context of its usage for anesthesia and intensive care. The capnogram directly measures the inhaled and exhaled concentration or partial pressure of CO2 produced by the patient. Furthermore, the device can indirectly measure the amount of arterial CO2.

There are five major physical methods for detecting CO2; however, the least expensive and most popular method for CO2 detection involves using IR technology.

The actual device interface includes a mask that contains an IR light source, some filters and focusing lenses, and an IR detector. The IR source shines IR light through the cloud of CO2 particles produced by the patient. CO2 selectively absorbs 4.3 micron IR light. The absorption amount is directly correlated to the CO2 concentration and thus the amount detected can be compared to a known standard of CO2.

The information that the capnography provides includes CO2 production, pulmonary perfusion, alveolar ventilation, respiratory patterns, and CO2 elimination. These data is presented as the inspired and/or expired CO2 plotted over time (Kodali, capnography.com).

This technology initially appealed to us because it was a technology that had concepts based very much like the pulse oximeter, is already interfaced with a mask, and is used to measure gas production. Our belief was that if we could place the sensor close between the drug outlet of the mask and the nose of the patient, the patient’s breathing can be monitored by his CO2 production and we can assume due to proximity of the drug outlet to the patient’s nose, that he would be effectively breathing the medicine. We can then use this to track the breathing of the patient over time and count up the amount of time that his CO2 production was above a minimal threshold (to account for adequate breathing) until it totally 10 minutes.

After speaking with Brian Walsh, a respiratory specialist at the Children’s Hospital Boston, we discovered some limitations in using capnography. We intended on using this technology for patients under 5 years of age. Currently, the capnograhy either directly measure the CO2 in the mask or takes measurements from side stream line that pulls out samples from the mask. Unfortunately, the amount of CO2 production by these young patients will be too low for any capnography device made cheaply to detect. Furthermore, the capnography device requires a near perfect seal between the patient and the mask. However, the current masks contain vents to allow the release of the CO2 and a perfect seal for infants is nearly impossible. Given these limitations, we decided we needed a more feasible and reliable method for monitoring dosage.

During our visit to speak with Brian Walsh, he introduced a new nebulizer that is based on vibrating mesh instead of the standard air jet from the compressor pump.

The new aerosolizing technology was implemented in a nebulizer made by a company called Aerogen. The structure of the device is a thin mesh material with ~1000 holes. The device is battery powered to cause the mesh to vibrate at 100,000 times a second. This vibrating motion is a sieve-like motion that draws the albuterol liquid sitting above the mesh through the holes like a pump and effectively aersolizing the liquid droplets into consistently sized, aerosolized particles (Aerogen.com). The aersolized drug will then fall down due to gravity and will collect in the chamber of the nebulizer until the patient actively inhales the drug.

This technology seemed promising because it addressed two major pitfalls in the current nebulizer design. One, it created uniform aersolized particles such that it is of a breathable size that will allow for effective delivery of the medicine to the appropriate areas of the patient lung. Second, the breathe-actuated feature of the device allows for more accurate monitoring of dosage because no medicine is actively pushed out of the chamber without the patient breathing it in- thus leading to a lower medicine loss and allows for more accurate measure of how much drug is breathed in.

When we visited Brian Walsh and Chris Hug, they also mentioned a type of nebulizer that operated by sending ultrasonic waves through the drug. These were developed around 30 years ago, and consist of a piezoelectric plate which transmits high-frequency vibrations through a liquid. These devices output a far higher volume of nebulized material than traditional jet nebulizers, and since the frequency can be very easily controlled do not have the problem of varying particle size encountered by jet nebulizer. At first we had the idea to utilize the high-volume output by collecting it in a reservoir from which multiple patients could be nebulized. However, we were told that though the particle size was uniform, it could often be too small - meaning that either that the particles would only be effective on deep-lung conditions or that they would not settle in the lungs at all but be immediately exhaled. In some cases, the ultrasonic nebulizers actually ripped up the molecular structure of the drug, rendering it useless.

We decided that considering the far higher cost of ultrasonic nebulizers they may not have much advantage over the jet method - especially since clinics in Nicaragua already have air compressors and compressed air outlets.

Caroline bought some Tupperware that we could use for vapor reservoirs. Today in D-Lab, we drilled a hole in the bottom to serve as a connection to the medicine chamber. Grace is also going in later today to drill holes in the side of the Tupperware® to place a laser and photo detector.

Playing around with the nebulized vapors in the Tupperware®, we noticed a few things. There was condensation buildup on the side, and we wondered if a non-static coating would ameliorate the problem. Also, pressure could build up in the reservoir if closed, so we need to think about whether multiple users would prevent this pressure build up or whether there needs to be some release valve.

There seems to be multiple ways to measure vapor size. Paul H. talk to us about the one way he does so for the Aerovax project. A laser sits on a stand and shoots a beam of light towards a photosensor. If particles are in the way, then they will diffuse the light and less light will reach the sensor. The larger the particles–> more light scattered–>less light detected by the photosensor–>lower resistance in the detector–> higher voltage outputted and recorded. Paul built and wired this system that we will use.

We want to measure relative vapor size of particles coming out from the nebulizer directly compared to particles that have been sitting in the reservoir to see whether time in a reservoir causes clumping of particles. This is important because Dr. Brian Walsh of the Children’s Hospital mentioned that particle size will dictate efficient delivery of the medicine in to the lungs. So we want to ensure that our reservoir is not changing the particle size.

Today, we were orientated to the setup and we plan on doing some tests during the week.

The optimal composition of the applied film is found to be: 50% SnCI~.5H20 with a concentration of 1% SbCI3.

Anti-static coating and its method of preparation:

This patent talks about composition of anti-static material composed of a synthetic resin base without any metallic particles. However, it is in the context of using this coating for the fuselage of airplanes; therefore it might be a bit more than what we need for coating our nebulizers.

Pictures of our Reservoir Prototyping Round 1
by Caroline Hane-Weijman 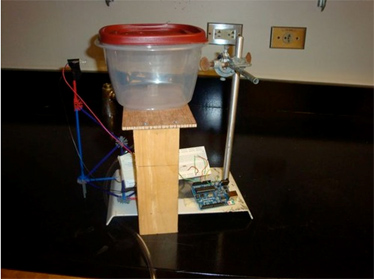 We need to explore a valve system so that the pressure does not get too high inside the reservoir.

Next step: Build the patient tube with a one-way valve and another vapor sensor! 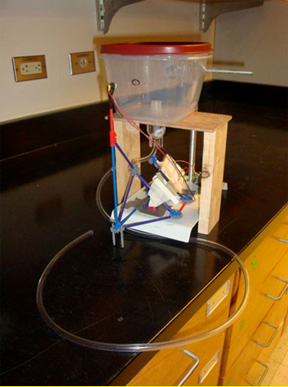