Science and literature exploring life on the near-future earth 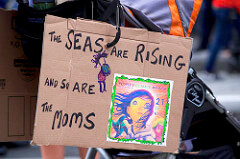 A project in which we contrast the imaginaries of fiction, especially as they concern race and gender, with those of scientists and science-emphasizing commentators. First, let us provide some background: Peter’s most-cited (and most-quickly written) 1992 article, “How Do We Know We Have Global Environmental Problems” (PDF) (revised in 1997) is not denying climate change, but problematizing each term in the question. Who is the “we” that knows? How does the knowledge portray the problems as “global” and “environmental”? And so on. In this vein, the paper noted:

“Tightening long-term projections [of climate change] or highlighting their severity is not…the only means by which policy responses to climate change could be catalyzed. As political scientist Glantz (1989) has observed, extreme climate-related events, such as droughts, storms, and floods, already elicit socio-political responses that can be relatively easily studied. Recent and historical cases of climatic-related “natural hazards” shed light on the impact of different emergency plans, investment in infrastructure and its maintenance, and reconstruction schemes. Policymakers, from the local level up, can learn “by analogy” from experience and prepare for future crises. Glantz’s approach is valuable whether or not these crises increase in frequency (or are already increasing in frequency) as a result of global climate change. Instead of emphasizing the investigation of physical processes and waiting for uncertainty to be eliminated before action is taken from the top, this approach calls for systematic analysis of effective versus vulnerable institutional arrangements. Such discussion of specific, local responses to climate change has been occurring. Nevertheless, the vast majority of funds for global change research is currently being devoted to improving GCMs and allied climatic studies…” Quote courtesy of Elsevier, Inc., http://www.sciencedirect.com. Used with permission.

In calling for analysis of specific, local institutional responses, Glantz and then Peter did not, at that time, emphasize the possibilities—perhaps necessity—of constructing alternatives to the gendered, racialized, economically exploitative, and hetero-normative aspects of institutions. What is evident, 25 years later, is that climate change discourse, shaped by scientists and commentators such as Monbiot (2006), remains centered on how change is being forced on us by inexorable physical processes. However, novelists,such as Atwood (2009) and Butler (1994), seem to be more imaginative about who could be involved in shaping life in future conditions, making difference central to how something other than hell on earth has to be formed (see also Arnason 2010, Richter 1967). Similarly, Afrofuturism, a movement in the arts based on alternative axioms, including the relation of oppression to climate change, offers a perspective of radical change as hopeful for and even managed by peoples of color (Barr 2008, Sun Ra, Womack 2013).

Now for the project proper: This project asks you to bring scientists and interpreters of literature into constructive conversation around responding to “crises [that] increase in frequency…as a result of… climate change,” especially as crises might implicate race and gender. You invent the form your product takes. Some possibilities include—but are not limited to—a sequenced set of excerpts from novels annotated so as to guide scientists into reading and writing more critically, a guide for bringing literary analysis to bear on popular climate change books, an imagined future exchange starting from the question “So, white guy, what did you do in the climate change crises?”