In this section, Prof. Beinart shares his insights on key aspects of the course, how they have come about, and their impact on the development of the course. 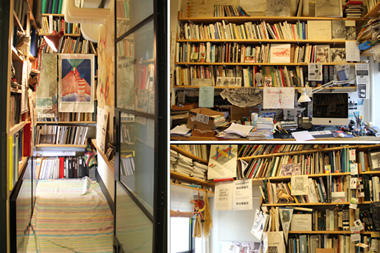 The amount of supporting literature in Prof. Beinart’s office is testament to his belief in continuous learning through reading. (Image courtesy of MIT OpenCourseWare.)

At the start of the course, students are provided with a reading list that includes recommended readings for each class session as well as corresponding background readings and a general bibliography. For any given class, students may be assigned upwards of 50 pages of recommended readings, along with five or so background references for each topic. Oftentimes, I will refer to a certain piece during lecture that the students are expected to have read, and in that sense, the readings are critical in supplementing the body of knowledge and discourse.

The general bibliography for this course now has about 500 titles. Kevin Lynch’s bibliography in 1956 had 50. There is too much reading to do, but I want students to get into the habit of being aware of and making the connection between theories of action and the practice that they do. They have to be reflective of this connection. “Why am I doing this? What idea is causing me to act this way?”

So many books are now available, and constantly reading new material and books has changed the way I currently teach the class. The Hemlock Cup, Bettany Hughes’s book on Socrates in Athens, is a better description of life in Athens in the fifth century than anything I have ever found. She claims that the agora in Athens is 37 acres, which is an enormous size. And that led me to thinking about what actually happened in the agora. Steven Johnson’s book, The Ghost Map, influenced me in understanding the incredible rebuilding of London after the discovery of Cholera Bacillus. The Enemy at the Gate, written by Andrew Wheatcroft, changed my view of Vienna because this is a detailed history of the unsuccessful Muslim attempt to occupy Vienna in 1683.

The course, as it stands, is now stuffed. It is like the attic that my grandmother filled up because she never knew what to throw away. And it is partly because I do not believe in knowledge as a fixed system. Even though there are fundamentals that I attest to, I still believe that my own ideas about the world keep on changing. And to that effect, the course has changed over time as I have changed.

These term papers that the students write are works of their own. For instance, I have just been reading a paper handed in this spring from a woman interested in the science of climate change. When we discussed her paper, I asked, “To what extent does the form of the existing city matter when it comes to mitigation against climate change, or pro-remedial action?” She wrote a paper in which she considered Dhaka, which is thought to be the worst and most dangerous city to be subject to climate change, London, New York, Durban at my recommendation, and four other cities in the world. She documented their plans, showed the relationship between the form of the city and their plans, and—since 40% of the world’s cities are built on the water—the effect of a predicted water level rise of one meter. In my opinion, that was a wonderful paper because she used data, which we did not explore in the course, but she applied that set of data to understanding the form of a city.

I also learn from students’ work. I now know more about what Durban is proposing. 44% of the population of Durban is below the poverty line. They are threatened by the Indian Ocean; so their plans must take into account the 50% of the population that lives in water settlements, which is an enormously added cost. And I have learned about all of this from the student who did that profile. 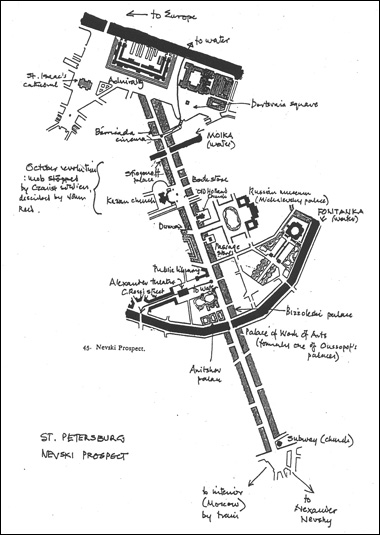 Prof. Beinart uses an annotated plan of the Nevsky Prospect in St. Petersburg to highlight important features of the city to students.

Throughout the course, we focus on a number of case studies of city form. The method of making generalizations and creating theories about city form is the result of studying and critically analyzing examples of cities.

The case studies are partly classical for the series of nineteenth-century cities. I choose things that have an ability to be told as a story. London, and more broadly-speaking, England, represent an infinite number of stories: the discovery of Cholera Bacillus in 1854, the Crystal Palace as the first great building of the nineteenth century, the rebuilding of the sewage system, the invention of the mortgage system in Birmingham, Engels in Manchester, Ann Lee starting the Shaker Movement, and the connection back to the idea about poverty and the pre-modern city.

Generally speaking, the cities chosen for case studies are examples of social and spatial structures. But firsthand knowledge is also important to bring to the case studies. I use Jerusalem and Johannesburg because I know those cities. I was born a thousand miles away from Johannesburg, I taught in the city, and practiced in South African cities under Apartheid.

Furthermore, what I teach has been focused largely on my own experience. And I keep building on that experience through reading, argument with colleagues, and asking questions. For example, I make Cuba a case study because I had visited Cuba with Lynch while Castro was still in charge, and I witnessed the application of Marxist thought in practice. The case studies on Mexican-American cities also resulted from my personal experience with the cities. When Jimmy Carter and the Mexican President got together after Carter’s election, a series of meetings took place on the bipolar cities, of which there are eleven. I attended the meetings at El Paso-Juárez, asked a lot of questions, and took many notes. And so, I am able to portray El Paso-Juárez as a comprehensive example of two cultures or two nations operating together as one city.

Cities that have a rich and available literature also form a good foundation as cases. The concept of the colonial city is best explained by Delhi and New Delhi. The whole process of choosing a site for New Delhi involved several issues, and the literature on colonial India is very extensive. There is a book titled Colonial Urban Development by Anthony King that I use as the basis of that case.