We can study convection in a laboratory setting using the apparatus sketched in the diagram below. A stable stratification can be set up in a 50cm square tank by slowly filling it up with water whose temperature is slowly increased with time. This is done using (i) a mixer that mixes hot and cold water together and (ii) a diffuser, which floats on top of the rising water. The diffuser ensures that the warming water floats on the top without generating turbulence.

For our diffuser we use a light metal box with an open top and holes drilled through its bottom. The box is then tightly packed with sponges and a buoyant ‘filler’ so that the whole device floats on water. After placing it into the tank, we take a hose with a stopper in the end and several holes along its length, and place it on the sponges, coiling the hose around itself once or twice. After slowly filling up the tank with cold/hot water we remove our diffuser as carefully as possible and let the tank settle for a few minutes.

Using the hot and cold water supply in the laboratory we can achieve a temperature difference of 20 C or more over the depth of the tank. The temperature profile can be measured and recorded using the thermocouples.

Heating at the base triggers convection from the bottom. It is supplied by a heating pad, whose power can be controlled with a transformer.

The motion of the fluid is made visible by sprinkling a VERY SMALL amount of potassium permanganate evenly over the base of the tank after the stable stratification has been set up. After switching on the heating at the base, thermals will be seen to rise from the base, overshoot the level at which they have zero buoyancy (the level where the T of the thermals is equal to that the environment, Te), and sink back. Successive thermals rise higher as the layer deepens.

Convection into a stratified layer heated from below: 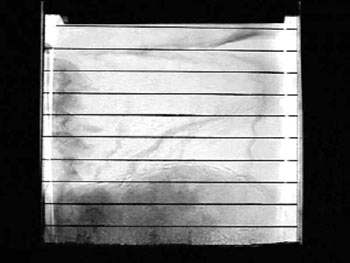 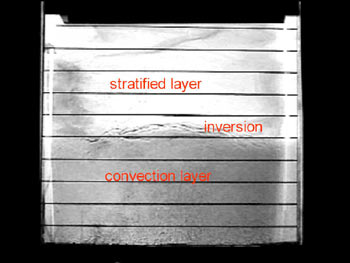 Convection carries heat from the heating pad into the body of the fluid, distributing it over the convection layer.

Convection into an unstratified layer heated from below: 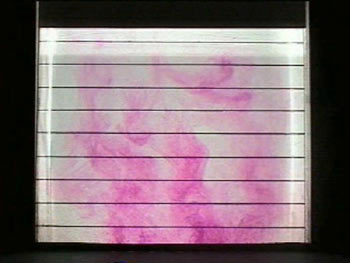 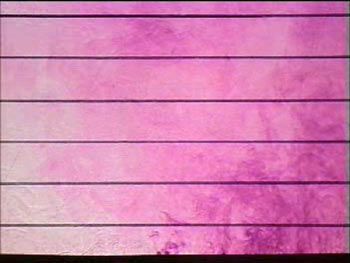 If the initial fluid is unstratified, then buoyant fluid rises from the heating pad right up to the free surface. There is no ambient stratification to constrain vertical motion. The picture on the right zooms in on the convective plumes.