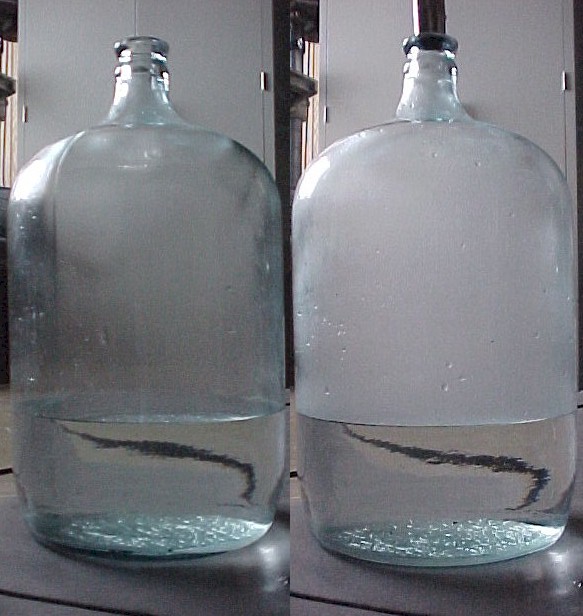 The sensitive dependence of saturation vapor pressure on temperature can be readily demonstrated by taking a carboy and pouring warm water into it to a depth of a few cms or so, as shown in the photograph. We leave it for a few minutes to allow the air above the warm water to become saturated with water vapor. We rapidly reduce the pressure in the bottle by sucking at the top of the carboy. One’s lungs can provide the `suck’ or, more elegantly, the hose of a vacuum cleaner can be inserted at the top for a second or two. One might expect that the rapid adiabatic expansion of the air would reduce its temperature and hence the saturated vapor pressure sufficiently that the vapor would condense out to form water droplets, a `cloud in a jar’. To one’s disappointment, this does not happen.
The process of condensation of vapor → water to form a water droplet requires condensation nuclei - small particles on which the vapor can condense. We can introduce such particles into the carboy by dropping in a lighted match and repeating the experiment. Now on decompression we do indeed observe a thick cloud forming which disappears again when the pressure returns to normal - see photograph (right).

A common atmospheric example of the phenomenon studied in our bottle is the formation of fog due to radiational cooling of a shallow, moist layer of air near the surface. On clear, calm nights, cooling due to radiation can drop the temperature to the dew point, at which point fog forms.

The sonic boom pictured below is a particularly spectacular consequence of the sensitive dependence of saturation vapor pressure on temperature - just as in our bottle, condensation of water is caused by the rapid expansion and consequent adiabatic cooling of air parcels induced by the shock waves resulting from the jet going through the sound barrier. 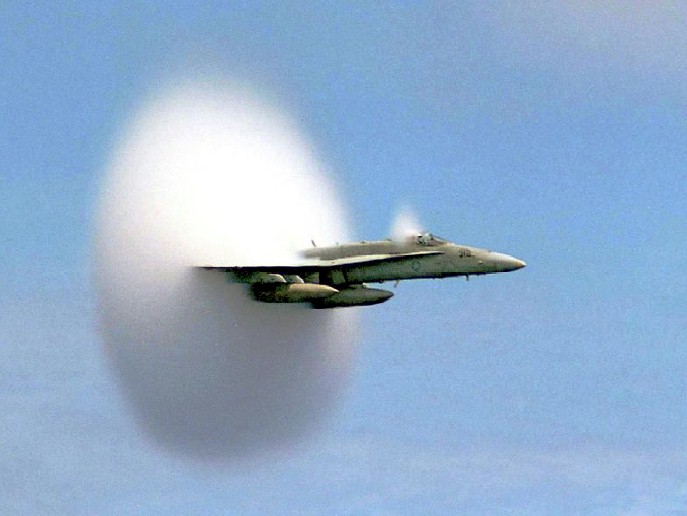 A photograph of the sound barrier being broken by a US Navy Jet as it crosses the Pacific Ocean at the speed of sound just 75 feet above the water. Condensation of water is caused by the rapid expansion and consequent adiabatic cooling of air parcels induced by the shock (expansion/compression) waves caused by the plane outrunning the sound waves in front of it. Shot by John Gay from the top of an aircraft carrier. The photo won First Prize in the science and technology division of the World Press Photo 2000 contest.