We bring the cylindrical tank, filled to a depth of 10 cm or so with water at a uniform temperature, up to solid-body rotation at a speed of 5 rpm, say. We sprinkle a few small crystals of potassium permanganate in to the tank. Note the Taylor columns.

Now we reduce the rotation rate to, say, 3 rpm. The fluid continues in solid rotation like a cyclonic vortex (same sense of rotation as the table) with lower pressure in the center and higher pressure near the rim of the tank. Note that the plumes of dye from the crystals on the bottom of the tank flow inward to the center of the tank at about 45 degrees relative to the geostrophic current (see fig. below, left panel).

Now we increase the rotation rate. The relative flow is now anticyclonic, with high pressure in the center and low pressure on the rim. Note how the plumes of dye sweep around to point outward.

In each case we see that the rough bottom of the tank slows the currents down there, and induces a cross-isobaric flow from high to low pressure. Above the frictional layer, however, the flow remains close to geostrophic. 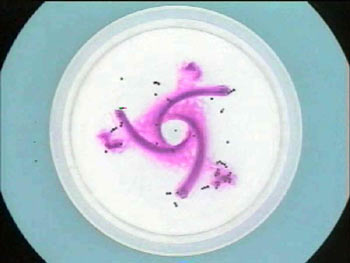 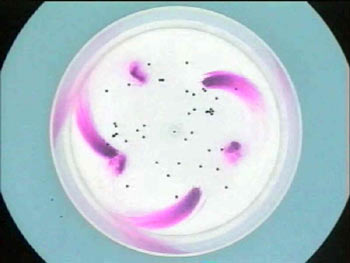 The figure below shows schematics of a cyclone (low pressure system) and an anticyclone (high pressure system). In the free atmosphere, where the flow is geostrophic, the flow just rotates around the system - cyclonically around the low, anticyclonically around the high. Near the surface, however, the wind deviates toward low pressure, inward in the low, outward from the high. The boundary layer within which this happens is known as the Ekman layer. Because the horizontal flow is convergent into the low, mass continuity demands a compensating vertical outflow. This Ekman pumping produces ascent - and, in consequence, clouds and rain - in low pressure systems. In the high, the divergence of the Ekman layer flow demands subsidence (Ekman suction) and are dry, which is why high pressure systems tend to be characterized by clear skies.