We place a large tank on our rotating table and fill it with water to a depth of 10 cm or so. We then take a hollow metal cylinder, generously rub petroleum jelly around its lower rim, and place it in the center of the tank so that it protrudes slightly above the surface (see picture below). A suitable cylinder, roughly 10cm in diameter, can readily be made by taking the lid off both ends of a coffee bean can. 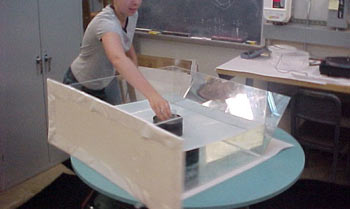 The table is set into rapid rotation at a speed of about 14 rpm (f = 3) and allowed to settle down for 20 minutes or so. Whilst the table is rotating we carefully and slowly remove the water within the cylinder and replace it with dyed, saturated salty (and hence dense) water delivered from a small beaker. When the hollow cylinder is full of colored saline water, it is rapidly removed in a manner which causes the least disturbance possible. Practice may be necessary.

The column of dense salty water slumps under gravity but is `held up’ by rotation forming a cone whose sides have a distinct slope. The cone acquires a definite sense of rotation, swirling cyclonically at its top in the same sense of rotation as the table. We measure typical speeds through the use of paper dots, measure the density of the dyed water and the slope of the side of the cone (the front) and interpret them in terms of the theory of thermal wind.

Have a look at the sequence of pictures below. Note how we use a mirror (at the top) inclined at 45 degrees to reveal the vertical structure. 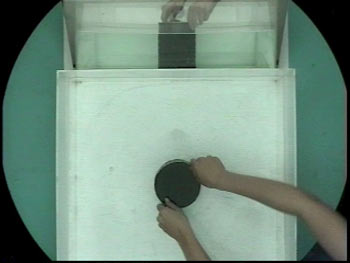 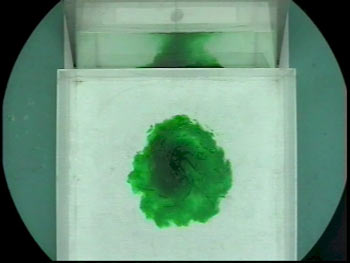 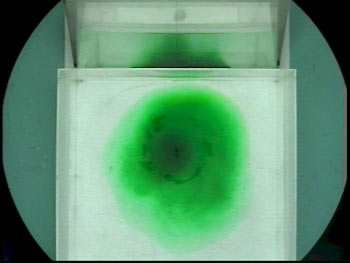 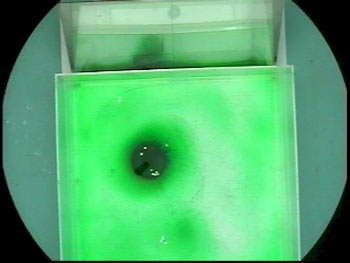 Why does the dense fluid remain contained in a cone, rather than flow over the bottom of the tank? Consider the figure below.  On the left we see a cylinder of dyed salty (and hence dense) water collapsing under gravity in to a rotating tank of fresh water. Its final state is not the intuitive one, with resting light fluid over dense separated by a horizontal interface. The schematic on the right indicates how the slumping column `concentrates’ and `dilutes’ the angular momentum of the rotating tank to generate horizontal swirling motions that prevent the column from collapsing.