Detailed description of this experiment, along with attendant theory (PDF).

The Coriolis force can be visualized by making use of the parabolic surface constructed in Lab IV. If a ball, initially at rest in the rotating frame, is given a push, it is deflected to the right.

We can experiment further by forming a `puck’ from a 1/2 inch diameter disc cut from rods of `dry ice’. The gas sublimating off the bottom almost eliminates frictional coupling between the puck and the surface of the parabolic dish.

Play games with the puck and study its trajectory on the parabolic turntable, both in the rotating and laboratory frames. Notice that when the puck moves in the rotating frame it is deflected to the right. The following are useful reference experiments: 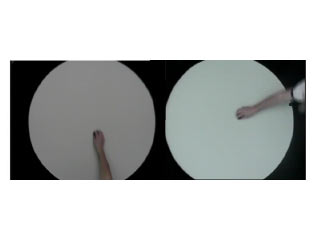 Trajectory of the puck on the rotating parabolic surface in (a) the inertial frame and (b) the rotating frame of reference. The parabola is rotating in an anticlockwise (cyclonic) sense.