An experiment in the Earth’s rotation

A classic experiment was carried out by Perrot in 1859 which closely paralleled Foucault’s pendulum. He filled a barrel with water (the barrel had a hole in the middle of its base plugged with a cork) and left it standing for two days. He returned and released the plug. As fluid flowed in toward the drain-hole it conserved angular momentum, thus `concentrating’ the rotation of the Earth, and acquired a `spin’ that was cyclonic (in the same sense of rotation as the earth) - the experiment was carried out in Paris in the northern hemisphere. 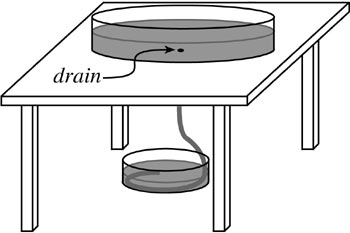 We will repeat Perrot’s experiment now. The experimental setup is shown in the diagram above. It comprises a leveled cylindrical container of radius 30cm filled to a depth of 10 cm with water (to prevent convection the container is covered with a lid until the time of the experiment). At the center of the cylinder is a small hole, 1.5 mm in diameter. Attached to the hole is a hose (also filled with water and stopped by a rubber bung) which hangs down in to a pail of water.

The water is left for a day or so (why?). When the rubber bung sealing the hose is released at the time of the experiment, water in the cylinder is sucked out in to a pail (the pressure in the hose is less than atmospheric pressure). The cylinder takes about 5 minutes to drain. Toward the end of the draining process a small polystyrene ball - the ball has a cross marked on it to ease observation - is gently floated on the water, and its rate and sense of rotation observed. 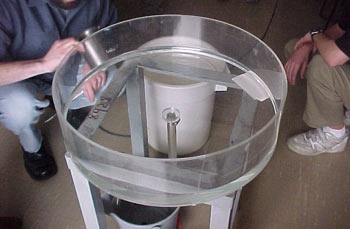 According to theory, we expect to see the ball turn in the same sense of rotation as the Earth.

This experiment is very tricky - you may have to carry it out many times and do some statistics!