It is relatively straightforward to demonstrate the essential mechanism behind wind-driven ocean circulation in a laboratory experiment.

The apparatus is shown in the figure below. A tank with a false sloping bottom is filled with water so that the water depth varies between 5cm at the shallow end and 15 cm at the deep end. A Perspex disc is rotated very slowly at the surface of the water in a (in the rotating frame) clockwise sense  - a rate of 0.4 rpm works well. To minimize irregularities at the surface, the disc can be submerged so that its upper surface is a millimeter or so underneath the surface. The whole apparatus, disc and all, is then rotated in an anticlockwise sense at a speed of f = 2 (~ 10 rpm). 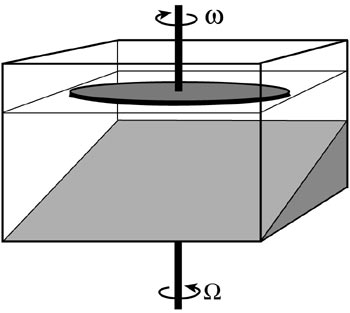 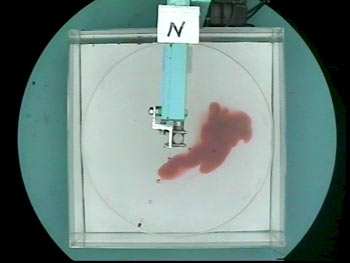 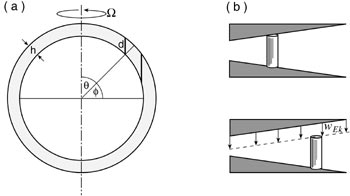 The stress applied by the lid to the water is analogous to the wind stress on the ocean surface. With clockwise differential rotation of the lid, fluid is drawn inwards in the Ekman layer just under the lid and pumped downwards into the interior, mimicking the pumping down of water in subtropical gyres by the action of the winds, as sketched below.

We see a clockwise (anticyclonic) gyre in the water with interior flow towards the deep end of the tank (‘southwards’), as the Ekman pumping drives fluid columns to the deeper end of the tank. This flow (except near the lid) will be independent of depth. A strong (’northward’) return flow forms at the ``western’’ boundary; this is the tank’s equivalent of the Gulf Stream.

Have a look at the sequence of pictures and the movie loop below: 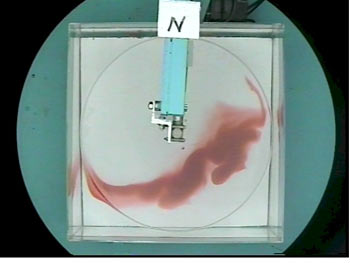 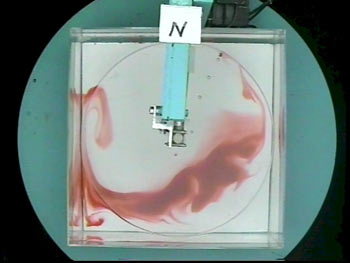