How does the brain filter and focus? This discussion session complements the prior lecture session Attention.

Attention is very important, especially when things are moving around. So we’ll talk about attention, and what’s it good for.

Despite all our talking about how amazing the brain is, it’s just not powerful enough to do something like listen to two people talking at the same time. It can’t keep two streams of information in mind at the same time, at least not at a high level, because it just doesn’t have the capacity. We had the example of priming, in which you can sneak a little information in on the side, but not really in an active, engaging kind of way.

How good is your visual attention? Try out the following object tracking exercise. Keep your eyes on the fixation cross in the middle of the screen. You’ll see one of the circles flash – keep an eye on it as the circles move around the screen.

Were you able it to follow it the whole time?

Now, try tracking multiple objects. Four circles will flash – can you track them all?

What if they’re moving quickly?

The limitations of our visual attention become evident in this demonstration, especially as the number of objects to keep track of increases.

Feature Search: searching for a target that differs from all distracters by a unique feature. 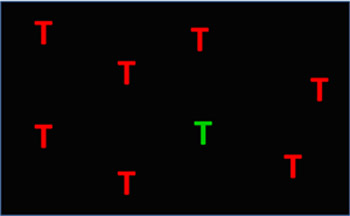 This is easy! The target seems to pop out at you. This is an example of bottom-up processing, in which your attention is captured by salient sensory information. 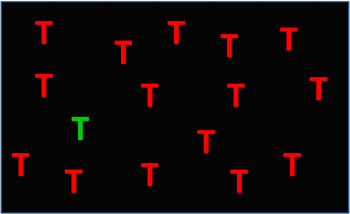 In fact, your search is just as fast even with twice as many distracters. Can you explain how bottom-up processing may be evolutionarily advantageous?

Conjunction Search: searching for a target that has a particular combination of the distracters’ features. 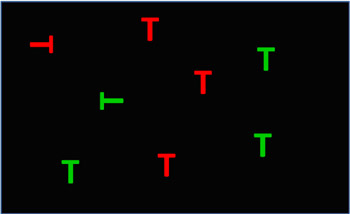 These objects have two features: color (red or green) and orientation (vertical or horizontal). You deploy top-down attentional strategies to integrate these two features when you search for the horizontal green T. 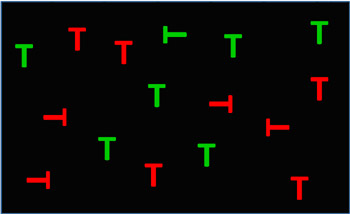 The more distracters there are, the harder it is.

In the popular book series Where’s Waldo?, children look for a character named Waldo – who always wears a red and white sweater and hat – in crowded scenes. What kind of processing is this? Explain your answer.

Watch the following PBS video blog to see an experiment and explanation of the phenomenon of change blindness.

To experience another limitation of your attention, watch this video clip. Can you figure out how the two scenes differ?

It’s the plane’s engine that is appearing and disappearing. This shows just how hard it is to notice change when you’re not focusing attention on the particular place where it’s happening.

While change blindness and inattentional blindness reveal the spatial limitations of our attention (i.e., we can’t focus on everything in our field of vision, and we often don’t notice things that we’re not attending to), attentional blink is a temporal limitation. Follow this link to an experiment on attentional blink, in which you’ll be able to manipulate some of the variables and see your results. 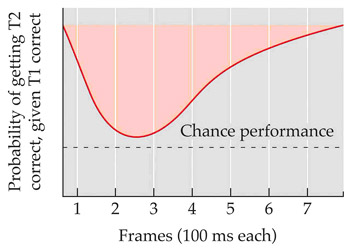 © Sinauer Associates, Inc. All rights reserved. This content is excluded from our Creative Commons license. For more information, see http://ocw.mit.edu/fairuse.

As this graph shows, if the first target and the second target are 100ms apart, the probability of seeing the second (after seeing the first) is relatively high. However, with a separation of 200-300ms, your chances drop. Accuracy improves with greater separation in time.

What are some real-life situations where attentional blink might come into play?

Let’s say a crime was committed, and they pull the people who witnessed it and ask, “How many gunshots did you hear?” Remember, if you hear one gunshot, you may panic and not notice the next couple of gunshots. And different people will give different reports of how many criminals there were, how many gunshots they heard, and so on. This is a problem in situations where we need to count or keep track of every occurrence of something.

It’s recently become illegal in Massachusetts to text and drive. When I was in Chicago, it became illegal to talk on the phone and drive at the same time, and if the police saw you, they could pull you over for that and give you a pretty substantial ticket. And in some ways, that’s a pretty good idea, right, because we know, after all these examples today, that attention is limited and it’s weak and we just don’t have a lot of it, and the world is a big, scary, frightening place with tigers coming at us everywhere. But what about doing other things in the car? Adjusting the radio, or talking to the person in the passenger seat? Are these just as dangerous as talking on a cell phone, texting, reading a book? What do you think?

Activities such as talking on the phone or adjusting the radio take your hands off the wheel, which seems to impair driving ability. However, evidence shows that when you’re using a hands-free system, your attention is just as drained, and you’re just as likely to miss something as when you’re holding a cell phone. So, while your hands may be free, it may not help your attention. And what about if there’s a person with you in the car versus on the phone?

Data show that talking to somebody in the car with you is substantially less dangerous than talking to somebody on the phone, as there actually may be a spatial component of attention. A lot of people say it’s harder to have a conversation on the phone – from a linguistic perspective, we’re not evolved to talk to people who aren’t around us, and it demands a lot of cognitive resources. There’s an idea of shared processing in a conversation: that because the other person is in the car with you, they are aware of the situation. For example, if traffic got bad, or if you pulled up to a stop sign, they would adjust the way they interact with you. It’s the shared attention to what’s going on around you that makes that situation less dangerous. So, if you’re trying to merge, they would not only let you know that a red truck also was trying to merge, they would also be quiet so you could focus on it. Whereas if you’re on your cell phone with your sister from out of state, she’s not going to be quiet when you’re trying to merge. So, it’s this shared frame of reference that also seems to help.