Prof. Gabrieli presents his evidence-based approach to teaching psychology and his approach to encouraging critical thinking about psychological questions.

Showing the Scientific Rigor of Psychology 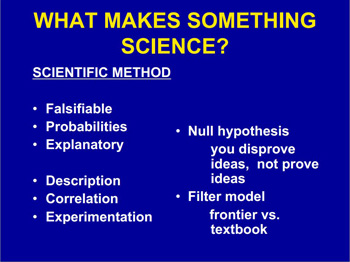 In this slide from his lecture on science and research, Gabrieli presents how scientific psychology differs from common sense. (Image courtesy of John Gabrieli.)

There are many introductory courses in psychology, but I’ve tried to tailor this course to people with a scientific leaning toward understanding the discipline. I feel this goes over well with MIT students.

I think it’s a common misconception that, within the discipline of psychology, it’s really easy to assert things about how to be happy or how to be self-confident. The culture of MIT is to be scientifically skeptical, in a good way. Within this culture, it’s normal to ask, “What is the evidence that something is true or accurate and ought to be believed, as opposed to just somebody’s opinion?”

In response, I try, as much as possible, in this course to show how psychologists approach measurement and theory testing, and the kind of data that supports their claims. If more complicated in its answers, I always feel it’s part of my task to convince students that psychology can be every bit as rigorous of an approach to understanding human nature as physics studies the atom.

We develop writing assignments through which students can think rigorously about course content, but also form their own opinion. We try to select topics that help students integrate their knowledge from the course with their understanding of real world issues. For example, are recovered memories real? Are they false? How should we think about them in legal systems? We try to get students to think about how laboratory research, which is relatively well-controlled psychology, can apply to societal concerns and problems.

We want students to really process the readings and really think though the evidence that is presented, but to come to their own conclusions. We want them to try to formulate an argument based on evidence. A danger in psychology is because so many topics seem to be intuitive ones that all kinds of people have opinions about, it’s so easy to say “Oh, I know it should be this way or that way” about almost any topic. Many students have these ideas when they enter the course.

What we want students to do is to take their initial ideas and then to think carefully about them in light of objective, scientific evidence. They might come to the same conclusion they had before, or they might be influenced to think about it differently. We want students to try to use objective evidence to inform their own judgment.