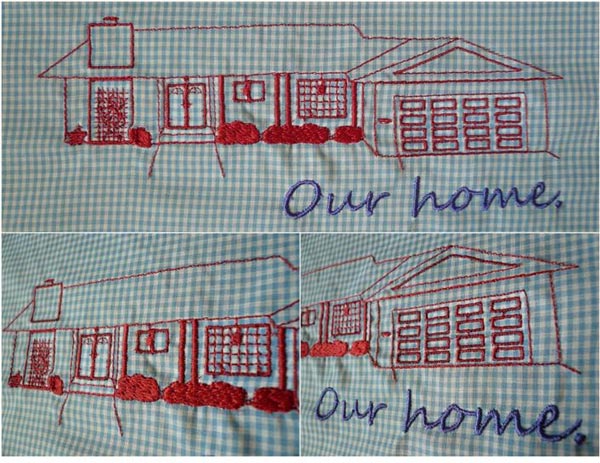 The embroidered image of our home.

I was fascinated with the embroidery machine when I saw it in action; not only was I mesmerized by the speed of the needle moving through and across the fabric, but I was also amazed by the resolution of the images it could create. With my dad’s birthday and Mother’s Day around the corner, I decided to embroider the image of our home in California and to make a small pillow out of it. (I considered knitting the design, but I knew that I wouldn’t be able to get the same image resolution at the scale I wanted with knitting as I would with embroidery.)
Process for drawing the design

In order to produce a relatively accurate drawing of my house, I copied the Google street view image of my house and “traced” it in vector format using the free SVG graphics editing software Inkscape. 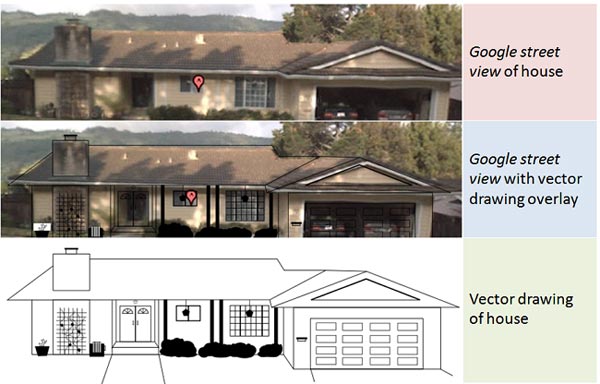 Deriving a vector drawing of the house. (Original photo © Google. All rights reserved. This content is excluded from our Creative Commons license. For more information, see http://ocw.mit.edu/fairuse)

Clearly, I had to draw some parts from memory! Once the vector drawing was complete, I saved it as a .pdf file, opened the pdf in CorelDraw, and saved it as an .ai file. To prepare a file appropriate for the embroidery machine, I opened the .ai file in the DRAWings software, in which I spent some time customizing the stitching patterns/styles. For example, I specified a “serial” stitch instead of the default “running” stitch for the columns in front of the house. I also experimented with different stitch patterns in the software to make the bushes look as bush-like as possible! 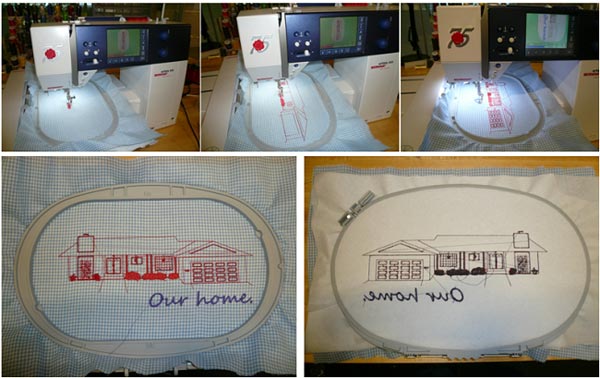 I used two sheets of the stiffening fabric behind the fabric to be embroidered on. It took about 21 minutes to embroider the drawing of the house. I had so much fun watching it happen! I wish that I used a solid color for the fabric, but that’s a minor detail.