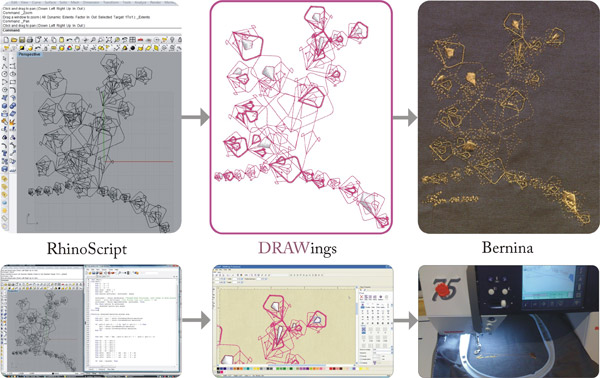 Workflow from RhinoScript to DRAWings to the Bernina embroidery machine.

I’m interested in exploring how algorithmic geometry can be generated in Bernina’s embroidery machine. I learned that although it’s fun to play with the embroidery software, I need to get more sense of how the scales and the pattern’s complexity will be converted.

I wrote this ‘blossom’ code in Rhinoscript as an extension of Trees Patterns. While the Fractal Trees creates branch and twig, my code creates algorithmic leaves and flowers. The way it works is similar: IF you find a line THEN turn it into leaf’s shape. Do that recursively so that every branch and twig will blossom. Also, randomly draws small petals to create flowers.

After the iteration, I can directly convert the pattern into *.ai files from rhino.

This software is so addictive but unreasonably expensive. I almost spent an hour just playing with different stitch and fills patterns to improve my original blossoming patterns. Satin’s style is my favorites. It can create small yarns’ dunes in the fabrics. The total line requires about 9000 stitches and 17 minutes.

Blossom on the Bernina embroidery machine.

As expected, I made mistakes. First, the scaling issues. It turns out what you see on the screens is not always what you get in Bernina. All the fine lines on DRAWings4 became way much bolder or thinner. I guess, it would have been nice to have a sort of textile palettes next to your screen when working with DRAWings. So you can instantly get a sense of how your design on the screen will be generated in the machine. Additionally, you can change the background and line color on the screen to fit your palettes. Second, the Simplicity issues. My algorithmic pattern has too many overlapping lines, and somehow it creates unexpected patterns (listen to the strange noises from the video). For this, I don’t have many options to test different colors since it would just make the pattern more complex. Third, is about preparation. In the middle of stitching process, the machine was running out of beads. So I need to change the bead which is also tricky. So, be prepared.

After the pattern was converted to *.AI files, all the algorithmic logic is also gone. As a result, the machine stitches the patterns following the way Illustrator converts the file from Rhino. It would be super interesting if Bernina can generate the original logic. 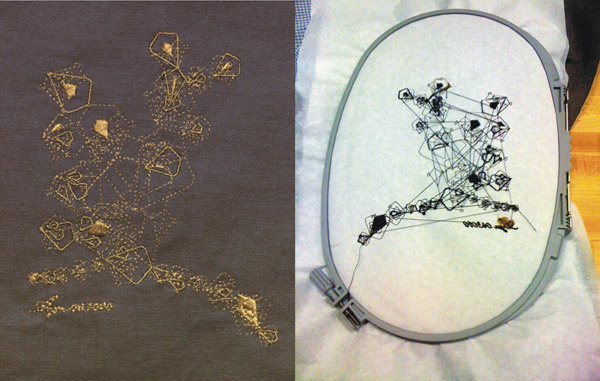 Blossoms as produced on the Bernina machine.