Back to Newton’s method: It turns out that the end result (the point to which the method converges, if any) is strongly dependent on the initial guess. Furthermore, the dependence on the first guess can be rather surprising. The set of points that converge to a given root is called the basin of attraction of that root (for the iteration under discussion). I would like us to visualize the basins of attraction by coloring each starting point with a color that corresponds to the root it converges to. The different basins will thus be given different colors.

With MATLAB® we can easily visualize which solution is chosen as a function of the initial guess. While this can be done for 1D, we will do it for 2D and learn how to do some simple linear algebra at the same time.

The update rule is slightly different since derivatives are more complicated in higher dimensions:

Notice that the Jacobian depends on \(\vec x\) and thus needs to be re-evaluated at every step (just like the derivative in one-dimensional Newton’s method). The two parts in the right-most term of (2) are multiplied together in the linear algebra sense of the word. The power \(-1\) is matrix inverse (and not multiplicative inverse) and thus another way of writing the update rule is

This formulation is a much better way of understanding Newton’s method, as it exposes what is going on: The approximation is updated so that if the linear approximation to \(\vec f\) (given by the Jacobian matrix) were exact, the approximation would equal the exact root in one step.

Now here’s the run-up to the next project: We want to plot the “basin of attraction” of each of the three zeros (what are they?) of the function \(\vec f\) (not \(\vec g\)). This will be your first project, but first we need to discuss how to plot the result. For an initial point \(X_0\) we can run the Newton code and after several iterations (10 in the example above) it will arrive near (in most cases) one of three roots, say \(r_1, r_2, r_3\). To visualize the basin of attraction, we go over a grid of points \(X_0\) and color them according to the to the specific zero the Newton’s method algorithm ends up being close to after starting from \(X_0\). If the algorithm is not close to any of them, we put a fourth color. While it is true that normally we do not know what the zeros are, but this is also interesting in the case that we do know what they are, so we are using the a priori information about the location of the roots in order to visualize the basin of attraction.

To do this we need if-else-end statements:

Project 1. Place the Newton code, and the if-then-else code above inside two nested for loops, looping over \(x-\) values and \(y-\) values from -2 to 2 (perhaps with a small step-size of 0.1 or 0.01). For each iteration set the starting point to [x,y]’ before the Newton’s Method part, and then plot the color point corresponding to the location of the resulting zero. So that the subsequent plot commands do not erase the previous ones, put:

before the for loops. Thus the pseudo-code for this construction is:

If this is your first programming project, you might get frustrated at how difficult it seems to get everything in place. There’s no way around it. Read you own code carefully. Give good names to your variables. Try to explain the code to someone else.

That said, there are several hints I can give: 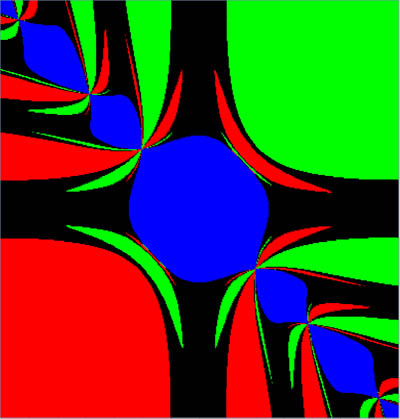