Functions define a small world of variables that are isolated from the rest of the “workspace”. This is mostly a good thing, though you may find it limiting at times. It is important to realize that a function can call itself, and even then the variables inside the called function cannot interact directly with those of the calling workspace. Here is an example to show this:

This is a function with no output, that calls itself. Calling it from the command-line gives:

User-defined functions are useful in providing structure to your code. When writing code try to think in terms of functions. Separate the big task into smaller ones and define them in terms of input and output. Your main code should then be easier to read as it will consist of calls to the functions, each of which has a clearly defined task. Notice that in a function file, one can define more than one function. Simply start a new line with the keyword function and continue as before. This function will only be directly callable from within the file (since the name of the file matches a different function) though there are tricks by which one can still provide access to such “hidden” functions (too advanced for this course).

Here’s an example of a function that calculates and plots the solution to the Van-der-Pol oscillator (must be saved into a file called VDPDemo.m):

We can run this function by calling it with the value for mu from the command prompt:

which results in the figure: 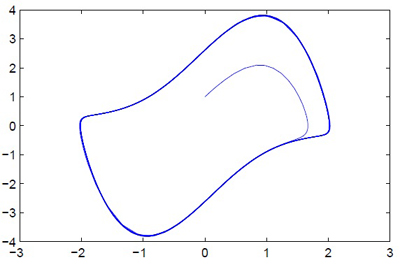 Plotting the solution to the Van-der-Pol oscillator.

Change the code for the Van-der-Pol oscillator:

(Hint 1: Read the helpfile for plot carefully to understand how to change the defaults) (Hint 2: Remember that to plot several plots on the same figure without erasing the previous figure you need to issue a hold on command.)

Homework 3. Debug this code. Put a break-point on the first line in the inner function and run the code (with input 2 for example). Step over ode45 and see how you can see the values of variables by “hovering” the mouse pointer over the variable in the editor. This only works if the variable can be “seen” from the current scope. Click “step” a few times to see the code advancing.

Change the code so that the function dXdt is defined outside the main function (by moving one end placement). Debug again and notice how the variable mu is no longer visible inside the function dXdt. At what point does the code fail?