Below, Elizabeth Choe and Jaime Goldstein discuss the sense of community that was evident in 20.219 Becoming the Next Bill Nye. They touch on how situating themselves as facilitators-of-learning, as opposed to omniscient givers-of-knowledge, communicated to students their respect for them as learners. The instructors also share that reading students’ daily blog reflections served as a strategy for tuning in to the general wellness of individual students and the group. They note that the simple act of checking in with students about their daily lives offered the instructors opportunities to highlight how students might use their personal interests to fuel interesting projects in the course. Their conversation has been edited for clarity, length, and content.

ELIZABETH CHOE: I was really happy with the sense of community in our classroom. In many discussion-based classes, you get the awkward moment where the teacher says, “Well, what do you guys think about this?” And then there is silence throughout the room. Someone finally talks because they know that they have to, and they just want to get it over with. I suppose it was like that the first few of days in 20.219 Becoming the Next Bill Nye, but by the end of the course, people were actually contributing in an authentic way. I also noticed that, at the end of the course, they exchanged email addresses and friended each other on Facebook. I don’t think this happens in every class. Jaime, I feel like there was something about your presence in the classroom that really helped facilitate a good sense of community and created a learning environment in which students felt safe to share their ideas. 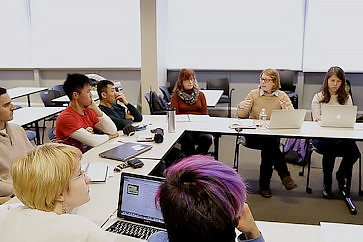 Students in 20.219 Becoming the Next Bill Nye engage in a classroom discussion (Image by MIT OpenCourseWare).

JAIME GOLDSTEIN: I think part of that came from my philosophical belief in truly honoring the students and their voices. I saw myself, in this class, and I know that you did too, as a facilitator-of-learning, and not an omniscient giver-of-knowledge. When you act as a facilitator, you communicate to students “I respect you, and I’m going to work with you, meet you where you are, and help you get where you want to go.” This is a very different message than “This is where you need to be. Meet me here, or else.”

ELIZABETH CHOE: Students’ daily blog posts helped me get a sense of the kind of community we were building in the class. Specifically, they helped us keep an eye on the general wellness of students, which was a new experience for me as an instructor. I noticed at the beginning of the course students found the workload overwhelming. I wouldn’t have known that had it not been for their daily blogs. Also, I saw when students were posting at very late at night and into the early morning hours. In fact, one student posted, “I had to film in a building on campus at 2 o’clock in the morning, when it was finally nice and quiet.” I thought, “Wait a second. You should not be up at 2:00 in the morning!”

The blogs offered opportunities for us to ask students if everything was okay or if people needed more time to work. Just by sending a quick email, we could say, “Hey, I noticed that you sounded really tired in your blog post and that you posted really late at night. If you’re overwhelmed with stuff, or you need an extension, please let us know.” This process of reaching out to students is important because I know it’s hard for students to ask for help, especially at MIT.

Also, our work in the class was rooted strongly in students’ personal interests. We needed to talk to them about the things that excited them. Asking someone about how their day was going got them talking about the class they previously attended, or about a project they were working on. This gave us an opportunity to say, “You seem really excited about that project. Why don’t you talk about it in your video?”

I’m sure that if someone reads this transcript, and they get to this part where we talk about creating a healthy classroom culture, they’ll want to know the recipe for replicating it. Unfortunately, there is no recipe. There are so many small things that go into creating a respectful and productive classroom culture that it becomes difficult to articulate how they all work together. But, that being said, I think asking a student how his or her day went is a really important thing.