Link back to Day 1

Day 2 Script: Draft for “How does Food Turn to Mush?”

Goes to me in some setting…kitchen burred in bg, me in fg???

Have you ever wondered how things rot in the fridge? Like, it’s literally a flesh eating disease just chilling in your kitchen.

bottom of screen “don’t worry, it can’t eat you”

No big deal. Ask anyone and they’ll be saying something along the lines of “it’s bacteria I think.” And that’s mostly true but how does it work?!?! How does it turn a perfectly good floret of broccoli

Well, the wide and wonderful world is full of a variety of creatures, among them bacteria and fungi, many of these whom—we’ll call them Saprophytes—survive entirely by eating dead matter, playing crucial roles in the recycling of carbon and nitrogen back into the living world. Instead of how we eat food and digest it in our stomachs, these organisms break down their food outside their bodies and then absorb the small food particles in a process known as extracellular digestion.

How food is broken down is largely dependent on what type of food it is. Fresh foods, like fruit and veggies and meat rot a whole lot differently than processed foods like potato chips do. In this video, we’re going to focus on fresh foods and in particular, veggies and fruits.

When looking at vegetables and fruits, determining whether fungus or bacteria can infect it is largely dependent on pH, or how acidic something is. Fungus tends to function in all pHs while bacteria prefer more neutral zones. Vegetables are susceptible to both, because they often have a nearly perfectly neutral pH. Fruit, on the other hand, are more acidic, and mostly only have fungi to worry about.

Let’s look at broccoli. Since broccoli is a vegetable, it has to deal with fungi and bacteria.

When a bacteria or fungus wants to invade the broccoli, it’ll secrete an enzyme to break down the outer barriers of the broccoli’s cells, which is made of cellulose and other polysaccharides, or complex sugars. Once it’s past this barrier, the water and other nutrients of the cell are released. This is what causes that gross liquid to form around the plant.

After this, the invader will release a variety of enzymes. Amylases will break down storage starches into simple sugar. Lipases will break apart any lipids into fatty acids and glycerol. Proteases will break the bonds between proteins and result in amino acids.

As smaller particles form, the fungi and bacteria will absorb the nutrients through passive diffusion, transport, and endocytosis.

Usually this process takes 10–14 days to reach a point at which it probably isn’t safe to eat the veggie / fruit and after it’ll start to look like this.

How do you prevent your fresh food from going bad? My advice, eat your veggies.

Link back to Day 2

Link back to Day 3 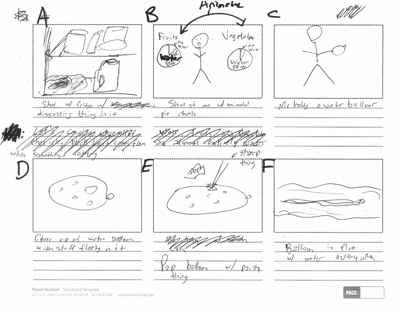 Script for the Scene

Link back to Day 4

I will explain why it’s so terrible.

See the full credits on the course Tumblr.