Why do some people handle cold better than others? Why is it that some are so fearful of the cold; that they rather die than be caught outside without all the winter gear on, mask an all, while others can wear one layers for a morning jog? What makes all the difference?

To understand this we first need to find out how our body reacts to the cold:

It seems that that not all bodies are created equal, in terms of maintaining our body temperature. Some people just have more efficient methods of generating the heat through metabolism, much like how some people just never seem to get fat no matter how much they eat. Others have more fat, which acts like another layer to keep the warmth within the body. Genetics seems to have a play in both these areas.

Also, people who are smaller, which translates into having a more surface area compared to volume, lose heat more easily because they have more possible surfaces in contact with the corresponding air currents to lose heat by. (shrinking person / stick figure / comparing a large person to a small person)

Furthermore, body types can have an effect on how one is more able to withstand the cold: “One group of people who can withstand cold really well? The Inuit, who live in freezing temps year round. Indeed, studies have shown that the Inuit tend to have shorter, stockier frames than people who live in other climates so that their bodies can preserve their core temperature better. Shorter limbs mean less areas in the body to which blood has to travel to keep warm.” [1] (cue igloo with cartoonish inuit people)

Introducing “Wim Hof” from the Netherlands, also nicknamed “Iceman” for his ability to withstand extreme cold conditions by “turning up” his internal thermostat with his “mind”. In 2009, Iceman here was able to complete a full marathon in temperatures close to-20 degrees celcius dressed in nothing but his shorts. In 2011, he spent 1hr 52mins standing fully immersed in ice. Wim Hof practices certain forms of meditation has allowed his body to produce more heat than it would normally do as well as shut down certain proteins to slow heat loss to surroundings.

Whilst Iceman has honed the ability to do just about everything in winter wearing just shorts, I think us normal humans would do better being more layered up. We can withstand the cold weather indoors with a cup of hot chocolate by the fireplace in peace. (end off with a shot of someone drinking hot chocolate and enjoying himself)

[1] Read more: Why are Some People Colder than Others?

Link back to Day 2

This video is courtesy of David Yam on YouTube and is provided under our Creative Commons license.

Link back to Day 3 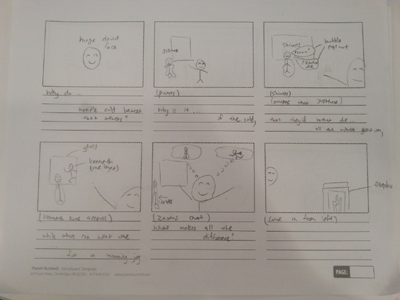 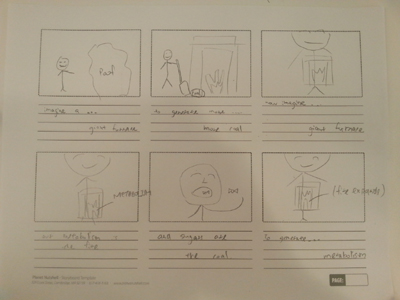 Script is written inside per picture.

Why do some people handle cold better than others?

Why is it that some are so fearful of the cold;

they’d rather die than be caught outside without all the winter gear on, mask and all,

while others can wear one layer for a morning jog?

What makes all the difference?

to generate more heat we need to burn more coal.

Now imagine your body as this giant furnace,

our metabolism is the fire

and sugars are the coals.

To generate more heat within our bodies, we need to burn more sugars with our metabolism.

(Sorry for the crappy drawings. I’m really bad at drawing.)

Link back to Day 4

Why do some people handle cold better than others? Why is it that some are so fearful of the cold; they’d rather die than be caught outside without all the winter gear on, mask and all, while others can wear one layer for a morning jog? What makes all the difference?

Our blood circulatory system acts like highways to the different organs, imagine our blood as trucks carrying oxygen and heat to the organs. As the speed of the trucks are higher, more heat falls out and is lost to the surroundings. Hence our body slows down the flow of blood by tightening up the blood vessels. This is the same as squeezing a lane on the highway.

It turns out that our bodies aren’t always equally created. Some just have better genetic makeup than others, and are able to produce more heat from the same amount of sugars. Much like how some people never fatten up no matter how much they eat!

Contrary to belief, size DOES matter, and so does body type! For one, smaller bodies have more surface area to volume ratio and hence more areas to lose heat. Secondly, bodies with stockier frames and shorter arms mean less distance for blood to travel. Lastly, people with a “healthy bulge” have an extra layer of “insulation” from the cold!

But thankfully there is one way to increase our tolerance to cold: Meditation!

Introducing “Wim Hof” from the Netherlands, In 2009, he completed a full marathon in temperatures below - 20 degrees celcius dressed in nothing but his shorts. Wow. I’d probably not last 100 metres. Wim Hof is aptly nicknamed “Iceman” for his ability to withstand extreme cold conditions by “turning up” his internal thermostat with his “mind”. Wim Hof practices meditation that allows his body to produce more heat than an average person, as well as shut down certain proteins to slow heat loss to surroundings.

After understanding all this knowledge about withstanding the cold… perhaps there are mutants around us? These would be people that have evolved to better survive the cold.

And if the next Ice Age were to come, maybe they’d be the only ones around.

Link back to Day 5

If I were to go out for a run now, dressed like this, you’d probably call me nuts right? Because I wouldn’t be able to withstand the cold, and likely die, of hypothermia.

However, in 2009 Wim Hof, a Dutch man, completed a full marathon in temperatures close to dressed in nothing but his shorts. Where untrained individuals probably would die, when the body is too cold for normal metabolism and body function. Wim Hof, aptly nicknamed “Iceman”, is able to thrive in the cold. Now what makes “Iceman” able to survive whilst others can’t?

To study Wim Hof, researchers in Netherlands exposed Iceman to extreme temperatures in an ice bath for 1 hour and 44 minutes. Normally, a subject’s core body temperature would plummet below, causing hypothermia to kick in. However, while Wim Hof’s skin temperatures dropped by to, which is very cold, but his core temperature stayed surprisingly warm. It merely dropped to . The researchers couldn’t explain exactly what had happened.

One reason could be that Wim Hof is a genetic outlier. With greater ability to regulate his body temperature, producing more heat through higher metabolism. In a separate study, individuals with ancestors that lived in cold climates were found to have mitochondria that generated more heat and less chemical energy. [1] This enabled them to better survive the cold. Wim Hof is from the Netherlands, so maybe it’s his genetic ancestry that saves him? Hmm. But as a one of a kind “Iceman”, it doesn’t seem that genetics itself is enough.

Another possible reason is his physical makeup. With a large stocky body and shorter limbs, one has less surface area contacting the cold. [2] This results in less heat loss to the environment, hence individuals can better preserve vital heat. However, Wim Hof doesn’t have a usually large body or shorter limbs, at least not from the pictures I see. For all we know, he has normal proportions as anyone else. We could attribute increased levels of fat as more insulation to heat, however Wim Hof doesn’t have more fat than anyone else either. So really, after all this, what gives?

Wim Hof practices “g-tummo”, a Tibetan form of breathing, which enables him to double his metabolism. Effectively producing enough heat to keep his core temperatures warm. Well you might tempted to believe that this is wishy-washy non sciency-ish. However, studies conducted at NUS have confirmed that g-tummo is able to increase core body temperature. [3] The study was conducted on Western participants, all of whom had no prior knowledge of the technique no less.

To quote Wim Hof, “We have perfect mechanisms in our bodies, but we intervened with nature when we started wearing clothes. We need to reawaken those mechanisms.” In fact, he hopes to teach others the ability to harness the mind, enabling it to control areas of the body we never thought we could. Other than combatting cold, Wim Hof has shown control over his immune system. And with his techniques, trained individuals have been able to consciously activate innate immune responses. [4] Now if we were to fully understand his methods and how it works, who knows what doors it could open in our resistance to cold / diseases?

(Yea, i think its still too wordy.

I’ll add in the cutscenes / camera angles / go through the writing again tmr.)

[4] Koxa, Matthijs, et al. “Voluntary Activation of the Sympathetic Nervous System and Attenuation of the Innate Immune Response in Humans.” Proceedings of the National Academy of Sciences of the United States of America 111, no. 20 (2014): 7379–84.

Link back to Day 6

David’s rough cut is not available.

This video is courtesy of David Yam on YouTube and is provided under our Creative Commons license.

How Can I Survive the Cold?

See the full credits on the course Tumblr.