Below, Elizabeth Choe and Jaime Goldstein discuss how they used backward design (Wiggins & McTighe, 2005) to identify course goals and how they used a rubric to communicate to students the non-linearity of video production work in the context of a course in which content was, by necessity, modularized to promote sequential skill development. Their conversation has been edited for clarity, length, and content.

ELIZABETH CHOE: I had many ideas about what I wanted students to accomplish in 20.219 Becoming the Next Bill Nye. I wanted them to produce a video, to become digitally literate, to engage others on camera, and to understand the role of media in their own professional careers—to name just a few. However, I didn’t know how to tie all of these things into coherent course goals, or how everything would build up to those goals.

In fact, initially, when I met with you, I said I wanted students to become familiar with camera work. You replied, “That’s not really what you want, right?” When I reflected on my experiences making Science Out Loud, I realized camera work was only the tip of the iceberg of what I wanted students to learn. I was really more interested in having students become excited about communicating—and learning how hard it really is to communicate through video. These things have nothing to do with a camera. I realized that, at the end of the day, it wouldn’t be a big deal if students’ videos weren’t very good. We knew that we could help them with that part. The purpose of the class wasn’t really about making a flawless final video. It was about developing students’ digital media skills. 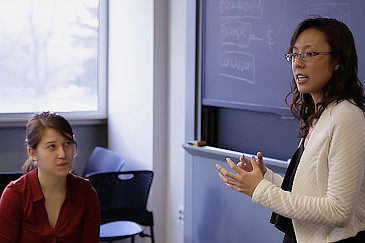 Elizabeth Choe delivers a lecture in 20.219 Becoming the Next Bill Nye (Image by MIT OpenCourseWare).

But the nuances of distinguishing between concrete skills and ways of thinking was something that I didn’t really understand at first. Maybe it sounds really obvious that a skill is different than a way of thinking, but I didn’t really appreciate that as a student at MIT. I just went into classes thinking, “Well, I need to learn discrete skills.” But, as the instructor for 20.219 Becoming the Next Bill Nye, my priority was for students to feel comfortable being themselves as digital storytellers. I didn’t know how to pair that with technical skills of being able to script a video, or to engage others on camera.

JAIME GOLDSTEIN: Right. So I tried to think backwards with you about where we wanted students to be at the end of the class, including the concrete skills we wanted them to be able to demonstrate and the more abstract concepts we wanted them think about—like developing a framework for understanding the role of media in their own professional careers. Wiggins and McTighe (2005) call this backward design. As an instructor, you ask yourself, “What do I want the students to be able to do when they finish this class? What will that look like? What will that sound like?” You paint a picture: by the end of this class, students will be able to have these skills, be able to do this kind of a project, and will be able to think this way about this issue.

I used this strategy when I taught elementary school. I always thought about the whole year first, identifying what I wanted my students to understand and be able to do by the end of the school year. Then I then would break down the curriculum down into smaller pieces that would help students accomplish the larger goal.

I always came up with a culminating event (authentic, when possible) for students to work towards, such as presenting to a CEO, doing a play for parents, or creating an art gallery and sharing it with the other students, so they could share what they learned. I created experiences through which each my students could carve his or her own journey through the material. I did this so that learning would become personal and meaningful. People learn when they care—and in order to make them care, they have to focus on something that they actually find meaningful.

The video project in 20.219 Becoming the Next Bill Nye was a perfect example of a meaningful culminating event because it was authentic. Students were actually going to be filmed at the end of the course, and have the opportunity to be a part of Science Out Loud. There was also this opportunity for a very deep personal journey through the material, because the task required specific technical skills, and everybody was at a different level of developmental readiness to apply those skills. There was also the more abstract understanding about digital literacy we wanted students to develop, and students came to the class with different levels of this understanding already in place. In other words, everyone had the opportunity to experience reaching his or her own finish line. 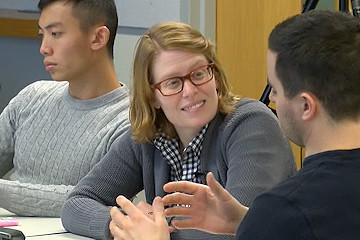 Jaime Goldstein helps a student refine his idea for the video he will produce in the course (Image by MIT OpenCourseWare).

Moreover, the workshop component of the course made it an ideal opportunity for students to actively engage in their own learning. But we couldn’t just stick them on camera and say, “go!” We had to build their skills set thoughtfully, in such a way that they started with a small skill nugget that grew into something larger and larger until they fundamentally felt capable of taking on the large task of creating an educational video. We thought very carefully about the individual toolboxes students were developing. At the same time, we thought about how we could develop a “big picture” framework for students, and then break it down into little pieces that would allow them to continually keep in mind the greater goal of creating a video for kids to inspire them.

We also considered when to introduce different components of the work. We thought about what students needed to know first, second, third, etc. in order to accomplish their goal of producing a video. Many of the components intersected, so this was challenging. We thought about what skills we could introduce early in the course, but then develop later with refinement once students really got involved in the work.

We used rubrics to communicate our expectations about what students should be doing at which points during the course and, ultimately, what constituted a successful experience in the class. Overall, the instructional design underlying the class accounted for a blending of complex experiences and our desire to make this class a personal journey for each one of the students in the class.

ELIZABETH CHOE: Yes, throughout our planning process, you talked a lot about making sure students didn’t get lost in the minutia of a certain day’s lecture, and how, instead, to keep them thinking about the big picture. However, the whole process of breaking skills down into modular toolboxes was really difficult because video production, despite what people think, is not a linear process. It’s unnatural to learn scripting before you know about storyboarding, because in practice you should really be thinking about them at the same time.

In fact, I went back and forth with you and with Chris [Boebel] about what we should teach first. Should scripting come first? I mean, we put it first, because that’s initially what you do first, but knowing about camera work affects the scripting, so should you put that first? That was really tricky. Although we ended up following closely to what the practice sequence is, because we figured it would be most helpful to the students to just go in order the way that you would when you work, the rubric was essential in helping convey how nonlinear the work really is.

Initially, I drafted a bunch of grading outlines for all of the assignments. I remember meeting with you, and realizing how bad they were! They included statements, such as “10 points if this scene is correctly lighted, and 5 points if you have a clear thesis to your script.” They were very plastic, element-driven evaluations.

At our meeting you showed me a typical rubric that you’ve used to evaluate students’ communication assignments. I noticed that regardless of whether the assignment was to write a paper, or to write a thesis statement, it was evaluated according to the same four traits, two of which were clarity and depth. For each assignment, the only thing that would change would be the specifics of the trait. For example, the specific clarity elements you look for in a paper are going to be a little bit different than the ones you look for in a thesis statement, but the overall goal is the same.

So we established four class values: spark, clarity, thoughtfulness, and challenge. The idea was that, regardless of whether the assignment was a selfie pitch, a script, or the final project, the rubric (PDF) would be the same. When assessing clarity in the context of students’ video pitches, we looked at image clarity. When considering their scripts, we assessed if students were clearly conveying their key ideas. In that way, it wasn’t about 5 points if the video was lit correctly. Rather, our focus was more on the degree to which their images and the language of their scripts conveyed their points with clarity. We took this approach so that students wouldn’t get lost in the minutia and think, “Oh, I need to make sure I’m doing the two-thirds rule, otherwise I’m going to miss five points on this.” Once we designed the rubric, that’s when the course felt more cohesive to me.

If you look at the final reflections students wrote in the class, or some of our teaching evaluations, you’ll see that none of the students said, “Now I know how to make videos and I’m going to make a bunch.” No one said that. No one said, “Now I’m going to go be a filmmaker.” But they did say things like, “I learned a lot about myself,” and “I feel empowered to be a better public speaker, and to communicate my ideas eloquently.” Someone even said, “Now I have a much better appreciation for how much work goes into films, and I can’t even see a bad movie without appreciating it just a little bit.” At the end of the day, that’s what I really wanted. I didn’t really care if people became masters at Final Cut. That wasn’t the point. I do think that learning how to do the technical aspects of video production is important. It just wasn’t our focus.